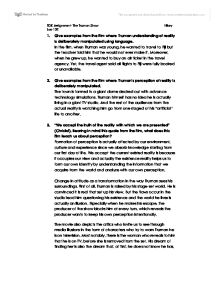 1. Give examples from the film where Truman understanding of reality is deliberately manipulated using language. In the film, when Truman was young, he wanted to travel to Fiji but the teacher told him that he would not ever make it. Moreover, when he grew up, he wanted to buy an air ticket in the travel agency. Yet, the travel agent said all flights to Fiji were fully booked or unavailable. 2. Give examples from the film where Truman's perception of reality is deliberately manipulated. The town is formed in a giant dome decked out with advance technology simulations. Truman himself has no idea he is actually living in a giant TV studio. And the rest of the audience from the actual reality is watching him go from one staged of his "artificial" life to another. 3. "We accept the truth of the reality with which we are presented" (Christof). Bearing in mind this quote from the film, what does this film teach us about perception? Formation of perception is actually affected by our environment, culture and experience since we absorb knowledge starting from our first day of life. ...read more.

As he mentioned in the movie, life will not have strong coincidences as he experienced in Seahaven, the fate or incidents that he may face differently in this world will lead him find difficulties to cope with the actual society we are living because not everyone will care for him in terms of protection, welfare to sustain his life and so on. 5. Can Truman ever really know anything? No, he would not. This is because I think there is infinite knowledge and infinite wisdom. And in this stage, we discovered very limited data to form knowledge and we are unable to discover all of them in this lifetime. In other words there is a difference between knowledge and wisdom and there is always information on so many things, which it may be too many for us to get all in one life time. Knowledge is the data you record in our head and without use; it slips away if we do not fully understands it. But wisdom is the way how we think base on how our own identity and philosophy is formed. However, Truman is a very strong example to let us understand he will never know all the true knowledge around the ...read more.

However, deception may occur. To avoid visual deception, wisdom and eyes alone cannot provide us with enough medium to see through deceivers. We need to collect both primary and secondary sources to distinguish which information is true. For example, we need to be clear what relationship are we looking forward to have with someone and do not just fully trust the people say it to ourselves directly because the things they are saying might not be true. 8. What knowledge dilemmas might Truman face as he enters the real world? He will find difficulty to travel around the community because once he leaves Seahaven. He will be unfamiliar with the world we are living in terms of infrastructure. Secondly, he will find difficulty to cope with people in the beginning because no one will protect him in the true world because when filming, everyone has to make sure is safeties in Seahaven. And his other moral values may have huge difference with people out of Seahaven because his view are manipulated by the production through language and the ways on how he is raised such as people in Seahaven always abolish his self-esteem when they heard him want to travel out of Seahaven. ?? ?? ?? ?? TOK Assignment- The Truman Show Hilary Lee 12E ...read more.