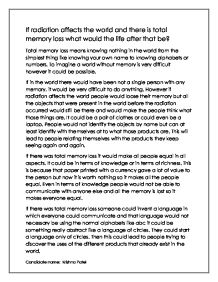 If radiation affects the world and there is total memory loss what would the life after that be?

If radiation affects the world and there is total memory loss what would the life after that be?

Total memory loss means knowing nothing in the world from the simplest thing like knowing your own name to knowing alphabets or numbers. To imagine a world without memory is very difficult however it could be possible.

If in the world there would have been not a single person with any memory, it would be very difficult to do anything. However if radiation affects the world people would loose their memory but all the objects that were present in the world before the radiation occurred would still be there and would make the people think what those things are. It could be a pair of clothes or could even be a laptop. People would not identify the objects by name but can at least identify with themselves at to what those products are. This will lead to people relating themselves with the products they keep seeing again and again.

If there was total memory loss someone could invent a language in which everyone could communicate and that language would not necessary be using the normal alphabets like abc it could be something really abstract like a language of circles. They could start a language only of circles. Then this could lead to people trying to discover the uses of the different products that already exist in the world.

Though they would be forming a new language in which they would communicate there would not be any reason for them forming that specific way of language. Once the memory is lost it is very important to have a language because it is the language that helps the people to relate to things. Language is the one in which the message is transferred from the sender to the messenger. So this makes it very important to have a language.

After all the memory is lost it would take a very long time for the people to even know about the most basic things like in life like food, clothes etc. It would just be like a new baby born on the world the only difference would be that for the baby there is someone to guide but for the other people it is that they are all to think of everything by themselves. This could also be like a very isolated area in the world about which the people who are staying there know nothing about the any other part of the world except for the place in the world they are staying. In this place it would be that people have their own different language, tradition etc.

At last I would say that if radiation affects the memory of the people it would seem to the people they are all in some isolated area with nothing being around them as they will not be able to perceive anything in the same way they did before the people got affected by radiation. Whereas the thing would be that the same things would be around them even after the memory loss it is only that they wont be able to relate to the things around them.