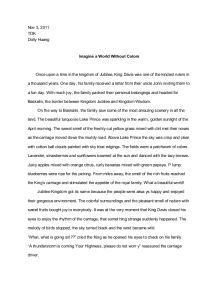 Imagine a world without colours

Nov 3, 2011 TOK Dolly Huang Imagine a World Without Colors Once upon a time in the kingdom of Jubilee, King Davis was one of the kindest rulers in a thousand years. One day, his family received a letter from their uncle John inviting them to a fun day. With much joy, the family packed their personal belongings and headed for Baskalin, the border between Kingdom Jubilee and Kingdom Wisdom. On the way to Baskalin, the family saw some of the most amazing scenery in all the land. The beautiful turquoise Lake Prince was sparkling in the warm, golden sunlight of the April morning. The sweet smell of the freshly cut yellow grass mixed with dirt met their noses as the carriage moved down the muddy road. Above Lake Prince the sky was crisp and clear with cotton ball clouds painted with sky blue edgings. The fields were a patchwork of colors. Lavender, strawberries and sunflowers beamed at the sun and danced with the lazy breeze. Juicy apples mixed with orange citrus, curly bananas mixed with green papaya. Plump blueberries were ripe for the picking. From miles away, the smell of the rich fruits reached the King's carriage and stimulated the appetite of the royal family. ...read more.

Since people lost their visual perception, they had to double check everything through sound and touch. Never did it occur to the King that Jubilee Kingdom would suffer so much, even the melody of birds turned disturbing, and the sweet smell of juicy fruits turned sour. People no long enjoy living in Jubilee Kingdom. The change in blindness caused a rapid increase in depression and affected people's emotions. People were used to a beautiful Jubilee Kingdom instead of being locked up in a world without colors. Losing the visual sense and reality made it difficult for people to stay rational thus the organic (human nature) changed from blind trust. As days went by, people had to learn to adapt the environment without colors. Although it was difficult and depressing, they had no other choice. Tourists stopped coming to visit Jubilee Kingdom and farmers could not work properly as all they could see was black and white. Life continued without happiness. Every day people were expecting change and experimented with new methods to make their new life better. Under the new environment, fashion designers redesigned the patterns of clothing with black and white to create new fashions. The lifestyle of people changed little by little, making progress to adapt to the environment without colors. ...read more.

There are other factors needed to be taken into account, such as the way the human's brain is not designed to see without colors so this might have mixed up the way our brain functions. I think that you'll be able to train you brain to only see black and white, because that's how the ancient people lived inside caves, but it would take time for the transition. That is why when the colors returned, people had to spend some time adjusting from black and white back to colors. The color transition also varies between people because just like the optical illusions, some people were able to see it straight away and some people just could not get it. However, in this case, just because those people could not see the optical illusion, they could still train their brain to become sensitive in seeing black and white. I wonder if this happened to me, what are the ways that I would conquer this disability because loosing the sense to colors isn't the same as loosing the eyesight, and although you're able to see, you can't really see. It would be difficult to distinguish shapes, distance and finding the subjects that you're looking for. I think that it will be a wonderful experience if I could experience it myself for a short period of time. ?? ?? ?? ?? ...read more.