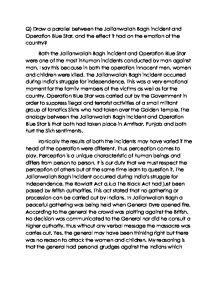 Yes, the general may have been thinking right but there was no reason to attack the women and children. My reasoning is that the general had personal grudges against the Indians which provoked him to do such a gruesome act. The general broke humanity's ethics and moral values in doing such an act. This event goes down in history as one of the cruelest activities conducted by man against man. The emotions of the victim's family were such that they were traumatized by this event. It is said that the walls of the Jallianwallah Bagh bullet marks can still be seen. Operation Blue Star occurred during the reign of Indira Gandhi. Militants had hid weapons in the Golden temple of Amritsar and posed a threat to the country. The golden temple is a place of worship and it is unethical for weapons or any sort of negative object to be within the temple boundaries. ...read more.

Science has played a major role in these two events. In one case the advancements made in science are used to kill humanity and in the other it is used for the safety of humanity. It is up to us to decide which aspect of science we can use for the betterment of the world. I would like to conclude by saying that every step we take leaves a footprint in time. Thereby it is best for us to look back at the happy emotions we have been through in life and forget the sad ones. We must move on in life and live and work hard in the present for a better tomorrow. I hope that incidents like Jallianwallah Bagh and operation Blue Star do not occur again and we must make sure that we do not give any reason for people to conduct such acts of cruelty again. ...read more.