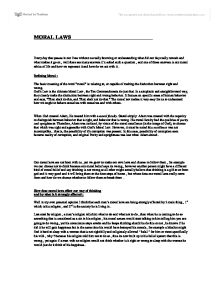 MORAL LAWS Every day that passes in our lives without us really knowing or understanding what did our day really contain and what makes it go on , well there are many answers if u asked such a question , and one of those answers is our moral ethics of life and how we represent it and how do we act with it . Defining Moral : The basic meaning of the word "moral" is: relating to, or capable of making the distinction between right and wrong. God's Law is the ultimate Moral Law , the Ten Commandments do just that. In a simplistic and straightforward way, they clearly make the distinction between right and wrong behavior. It focuses on specific areas of human behavior and says, "Thou shalt do this, and Thou shalt not do that." The moral law makes it very easy for us to understand how we ought to behave ourselves with ourselves and with others . ...read more.

believe that drinking is a gift to or from god and it very good and it will bring them to the door steps of haven , but where does our moral laws really come from and how do we choose whether to follow them or break them . How dose moral laws effect our way of thinking and by what is it strongly affected : Well in my own personal opinion I think that each man's moral laws are being strongly effected by 2 main thing , 1st which is his religion , and 2nd is the society he is living in . Lets start by religion , a man's religion tells him what to do and what not to do , then when he is coming to do so something that is considered as a sin in his religion , his moral senses would start talking to him telling him you are going to do wrong , yet his conscience stays awake and he ...read more.

to our planet earth today , back again to the sleeping example , it's much harder for a man living in the middle east maybe to commit such a sin , further more if might be easier for a man living for example in France, of maybe harder for a villager but easier for a who lives in the city . as we can see its all built in the mind of a single human , and the human chooses to go with his moral ethic of lose his original Purity and uprightness like Adam and Eve did . Moral laws are nothing but another laws humans made to make a reason for their action and what they do and what they don't , however laws are also made to be broken , and it rather more ironic how a person would break his own very rule and he would break his moral ethics , yet again this pure human nature is it not ? ...read more.