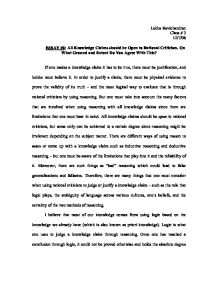 Lekha Ravichandran Class # 3 12/7/08 ESSAY #6: All Knowledge Claims should be Open to Rational Criticism. On What Ground and Extent Do You Agree With This? If one makes a knowledge claim it has to be true, there must be justification, and he/she must believe it. In order to justify a claim, there must be physical evidence to prove the validity of its truth - and the most logical way to evaluate that is through rational criticism by using reasoning. But one must take into account the many factors that are involved when using reasoning with all knowledge claims since there are limitations that one must bear in mind. All knowledge claims should be open to rational criticism, but some only can be achieved to a certain degree since reasoning might be irrelevant depending on the subject matter. There are different ways of using reason to asses or come up with a knowledge claim such as inductive reasoning and deductive reasoning - but one must be aware of the limitations that play into it and the reliability of it. Moreover, there are such things as "bad" reasoning which could lead to false generalizations and fallacies. Therefore, there are many things that one must consider when using rational criticism to judge or justify a knowledge claim - such as the role that logic plays, the ambiguity of language across various cultures, one's beliefs, and the certainty of the two methods of reasoning. ...read more.

This is because when Beethoven was compiling his music, they were all guided by his emotions and feelings so it's almost impossible to analyze his pieces objectively. He himself was not aware of how he completed his pieces and did not use self-criticism. Therefore, one's emotions affect the firmness of reason. This is especially true when it comes to love. Love is one of those situations that people cannot explain in this world. Of course, one can argue against it - but even if rational criticism is used to explain "love", it would only be relevant to a certain point. The emotional feeling that one experiences is almost unexplainable - so this, and other such circumstances, demonstrate that one cannot discern all knowledge using reason. Another factor that may affect reasoning would be an individual's personal beliefs. People argue that religion can neither be justified nor proved false through reasoning. One can maintain that since all knowledge claims can only be justified through physical evidence, and since religious beliefs offer none, it would be reasonable to deny the existence of God. This person may regard those who continue to have religious ideas as having mere beliefs, which are beliefs without any justification. But in response to this case, those who believe in God can assert that their beliefs are established by faith. ...read more.

But one cannot always solely rely on inductive reasoning. This is because, in the case of insufficient evidence, people tend to make informal reasoning - which leads to fallacies. Fallacies, such as hasty generalizations, can be misleading. Hasty generalizations are due to four main reasons: ignorance, laziness, pride, and prejudice. All these factors cause "bad" reasoning and limit our reliability of using inductive reasoning for rational criticism. Any claim to knowledge must be shown to be a justified true belief. Rational criticism can be used to a certain extent when trying to reason out knowledge claims. As it is evident, there are both advantages and disadvantages when it comes to using logic and rationalism to justify the "truth" of a belief. An individual's belief and their cultural background play a major role in relation to how he/she rationalizes and views a circumstance using their reason. Most situations in the world can be evaluated by means of reasoning, but there are also numerous other incidents when reasoning is not always relevant. There are some ideas in this world, gained through logic, which no one can argue against or deny. But one must be careful of when to use reason and to what extent because it could lead to "bad" reasoning and it may not even be applicable to the topic at hand. ...read more.