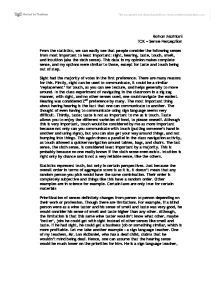 Sense Perception - The Theory of Knowledge

Rohan Mahtani TOK - Sense Perception From the statistics, we can easily see that people consider the following senses from most important to least important: sight, hearing, taste, touch, smell, and intuition (aka the sixth sense). This data in my opinion makes complete sense, and my options were similar to those, except for taste and touch being out of step. Sight had the majority of votes in the first preference. There are many reasons for this. Firstly, sight can be used to communicate, it could be a similar 'replacement' for touch, as you can see texture, and helps generally to move around. In the class experiment of navigating in the classroom in a zig zag manner, with sight, and no other senses used, one could navigate the easiest. ...read more.

Although this is very important, touch would be considered by me as more important because not only can you communicate with touch (putting someone's hand in another and using signs), but you can also get your way around things, and not bumping into things. This again draws a parallel in the class navigation activity, as touch allowed a quicker navigation around tables, bags, and chairs. The last sense, the sixth sense, is considered least important by a majority. This is probably because no one really knows if the sixth sense even exists. Intuition is right only by chance and is not a very reliable sense, like the others. ...read more.

Although, the limitation is that this same wine taster wouldn't know what other, maybe 'better', jobs he could get with sight instead of other senses like smell and taste. If he had sight, he could get a business job or something similar, which is more profitable. Let me take another example - a sign language teacher. One of my teachers, Mr. Lon McDaniel, who has a deaf child, claims that he wouldn't mind being deaf. Hence, one can assume that the hearing sense would be much lower on the priorities for him. He is a sign language teacher, and he can effectively communicate through sight and expression. This obviously shows how prioritization of senses differs from person to person, based on their occupation. ...read more.