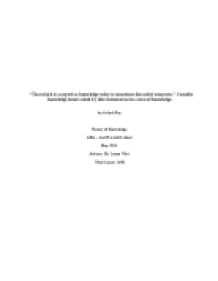 That which is accepted as knowledge today is sometimes discarded tomorrow. Consider knowledge issues raised by this statement in two areas of knowledge.

﻿?That which is accepted as knowledge today is sometimes discarded tomorrow.? Consider knowledge issues raised by this statement in two areas of knowledge. by Ashish Raj Theory of Knowledge ABA ? An IB world School May 2014 Advisor: Ms Leona West Word Count: 1498 To understand what beliefs that have been accepted to be true can remain as knowledge and what that has been accepted as knowledge cant, this essay will explore the certainty of knowledge in two areas of knowledge; science and history. The knowledge issues that arises in science is to what extent can we be certain of the knowledge that is obtained from the scientific method whereas the other knowledge issue in history is to what extent can we prioritize one primary witness over another. The primal essence of the scientific method that very much defines science is Inductivism. Inductivism is the use of inductive reasoning, a form of reasoning in which the premise of the reasoning moves from the specific to more general. Students who take IB Physics are familiar with this kind of reasoning when they have to design a lab. ...read more.

Hence the knowledge that we have today would be flawed. Similarly, the knowledge from today might be derived as a result of valid argument with false premises in which it would need change from time to time. In history an important distinction has to be made between the events of the past and the knowledge of the events of the past. The past cannot be changed as it is objective and to an extent because of this premise many historians consider history to be more objective than science. ?In a very real sense the study of history is concerned with a subject matter more objective and independent than that of the natural science. Just because historical matter is in the past is gone ...its objective reality is guaranteed. It is beyond altered for any purpose whatsoever.? - G.R Elton However on the other hand the knowledge of the past is subject to change. The knowledge of the past is obtained mainly from the interpretations of the events in accounted by the primary witness and secondary witness. The problems start to arise when there are varying accounts of one event and the historian has to choose one in order to develop interpretation of an event. ...read more.

The present knowledge of the event was changed several times since the police had to choose the prioritization of primary witness to interpret an event. Coming to the conclusion of this essay although Inductivism as of now is a fairly complex method to prove a belief as knowledge, the shortcomings in the initial phase i.e. observation might make the conclusion that is derived from this observation erroneous. Due to this the initial observation would need to be revisited and makes us question the certainty of the knowledge that is hence derived from the observations we have made. Hence the knowledge that has been derived inductively due to this inaccurate observation would change. History on the other hand has knowledge based accounts of primary and secondary witness. The issue commonly faced by historians is to prioritize to choose which witness over another. The choice of the account of the primary witness will then lead to a series of interpretations based on the witness. However if the conclusion that arises from this interpretation is erroneous then the knowledge has to be changed from scratch as the base of the knowledge chosen by the historians is dependent on the account of the primary and secondary witness. ...read more.