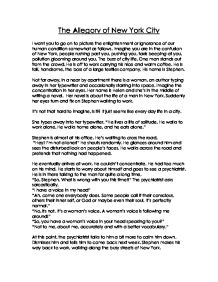 The Allegory of New York City

The Allegory of New York City I want you to go on to picture the enlightenment or ignorance of our human condition somewhat as follows. Imagine you are in the confusion of New York, people rushing past you, pushing you, taxis beeping at you, pollution glooming around you. The buzz of city life. One man stands out from the crowd. He is off to work carrying his nice and warm coffee. He is tall, handsome, the boss of a large textiles company. His name is Stephen. Not far away, in a near by apartment there is a woman, an author typing away in her typewriter and occasionally starring into space. Imagine the concentration in her eyes. Her name is Helen and she's in the middle of writing a novel. Her novel is about the life of a man in New York. Suddenly her eyes turn and fix on Stephen walking to work. It's not that hard to imagine, is it? ...read more.

Helen carries on typing, "Cursing the heavens in futility" "No I'm not! I'm cursing YOU, you stupid voice so shut up and leave me alone!" Stephen shouts starring into the sky. Yet again people give him strange looks and try to keep their distance from him. Imagine a crazy man in the middle of the street having a random outburst. What would you do if you saw him cursing into the sky? Imagine further that he tries to ignore his outburst and carries on making his way to work. He walks slowly and effortlessly gazing at everything around him. He walks into an electrical store for no reason and starts to watch the televisions. He sits down in one of the arm chairs and hears a familiar voice, "My latest novel will be sold nationwide and will be in a book shop near you!" Stephen jumps from the chair and puts his face right up to the television. ...read more.

She looks up and took in a big breath. "My golly gosh! What the hell are you doing here Stephen?!" "Stephen? Stephen? How do you know who I am, I've never met you before in the whole of my life! And, here you are in my head talking to me!" Stephen grabbed the book and opened it at a random page and started to read out loud. "Stephen lives a life of solitude. He walks to work alone, He walks home alone, and he eats alone." "How dare you and... Just how? I mean, why?!" "You're my inspiration Stephen!" "I never asked or wanted to be! I have no say in this at all!" Stephen walked away to calm himself down. He came to the conclusion that this could benefit him; Of course, he wanted to live his life the way it was, the natural way, the realistic way. But, he didn't know what his real life would be like. He was scared. He knows this life he lives, he's used to it. Changing it would be wrong, different and uncomfortable. He calmed himself down and made his way to the door. ...read more.