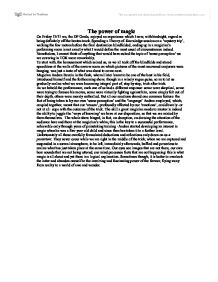 The power of magic

The power of magic On Friday 13/11 we, the DP Grade, enjoyed an experience which I now, with hindsight, regard as being definitely off the beaten track. Spending a Theory-of-Knowledge session on a 'mystery trip', walking the few metres before the final destination blindfolded, ending up in a magician's performing room is not exactly what I would define the most usual of circumstances indeed. Nonetheless, I cannot think of anything that would have suited the topic of 'sense perception' we are covering in TOK more remarkably. To start with, the bemusement which seized us, as we all took off the blindfolds and stared speechless at the walls of the narrow room on which pictures of the most renowned conjurers were hanging, was just a taste of what was about to come next. ...read more.

As we beheld the performance, each one of us had a different response: some were skeptical, some were trying to foresee his moves, some were virtually fighting against him, some simply felt out of their depth, others were merely enthralled. But all our reactions shared one common feature: the fact of being taken in by our own 'sense perception' and the 'language' Andrea employed, which, coupled together, meant that our 'reason', profoundly affected by our 'emotions', could barely -or not at all- cope with the outcome of the trick. The skill a great magician needs to master is indeed the ability to juggle the 'ways of knowing' we have at our disposition, so that we are misled by them themselves. ...read more.

Unfortunately all these carefully formulated deductions and reflections only dawn on us a posteriori. They never occur while we are right in the middle of the trick, when we are captured and suspended in a surreal atmosphere, to be left, immediately afterwards, baffled and powerless to realize what has just taken place at the same time. Our eyes see images that are not there, our ears hear sounds that are not being uttered, our mind processes facts that are not happening: this is what magic is all about and yet there is a logical explanation. Sometimes though, it is better to overlook the latter and abandon oneself to the involving and fascinating power of the former, flying away from reality to a world of awe and wonder. ...read more.