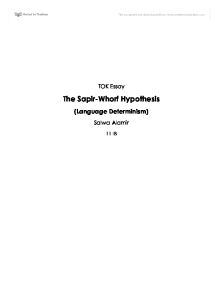 TOK Essay The Sapir-Whorf Hypothesis (Language Determinism) Salwa Alamir 11 IB Edward Sapir and, his pupil, Benjamin Lee Whorf, were two linguists studying language determinism in the first quarter of the twentieth century. They eventually joined forces and founded a hypothesis known as the Sapir-Whorf hypothesis. Their research led to one question of vital importance; does language determine the way we think? This question was later on morphed into claims which then resulted in further discussion of the matter. The hypothesis itself was divided into two parts; the strong version, stating that language determines the way we think, and the weaker version, which states that while language does not determine absolutely how we think, it does influence how we perceive the world, how we approach problems, and how we remember. Evidence supporting the weaker version of the hypothesis is a number of studies that "showed that when asked to remember nonsense shapes, people who had been given a name for that shape remembered it better than those people who had not been given a name for it. ...read more.

The stronger version of the hypothesis, which approaches the idea of language determining the way we think, also has numerous amounts of evidence. There is recent work in linguistics and cognitive science that supports the Sapir-Whorf Hypothesis. "Language in Mind: Advances in the Study of Language and Thought", is a collection of papers describing the hypothesis and focusing on the accuracy of the strong version of the theory. The claim supporting this division of the hypothesis was said by Shelley in his "Prometheus Unbound", he wrote: "He gave men speech and speech created thought". "He" here is in reference to God. This claim is considered a religious script and therefore cannot be measured as sufficient support to the hypothesis, but for religious people, another religious script maintaining the strong version of the hypothesis and the claim is in the opening of St. John's Gospel, "In the beginning was the word". More appropriate evidence involves the works of John R. ...read more.