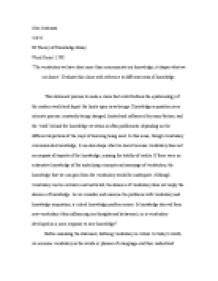 ﻿Alex Antezana 5/4/12 IB Theory of Knowledge Essay Word Count: 1598 ?The vocabulary we have does more than communicate our knowledge; it shapes what we can know?. Evaluate this claim with reference to different areas of knowledge. This statement pursues to make a claim that could buttress the epistemology of the modern world and depict the limits upon us as beings. Knowledge acquisition is an intricate process, constantly being changed, limited and influenced by many factors, and the ?truth? behind the knowledge we attain is often problematic depending on the different depictions of the ways of knowing being used. In this sense, though vocabulary communicates knowledge, it can also shape what we know because vocabulary does not encompass all aspects of the knowledge, missing the totality of reality. If there were no exhaustive knowledge of the underlying concepts and meanings of vocabulary, the knowledge that we can gain from the vocabulary would be inadequate. Although vocabulary can be exclusive and restricted, the absence of vocabulary does not imply the absence of knowledge. As we consider and examine the problems with vocabulary and knowledge acquisition, a critical knowledge problem arises: Is knowledge derived from new vocabulary (thus influencing our thoughts and behaviors), or is vocabulary developed as a mere response to new knowledge? ...read more.

of the examined thing is destroyed in the process of the examination. This destruction is inevitable when using logical analysis, as quality is an unquantifiable property. The Sapir-Whorf Hypothesis supports vocabulary shaping the way we behave and think. There are two components to the hypothesis; first, the ?strong? version which states that thoughts and behavior are determined and claims that the language we speak determines the way that you will interpret the work around you; second, the ?weaker? hypothesis states that language merely influences your thoughts about the real world (Language Acquisition). An example of vocabulary manipulating our thoughts is propaganda such as ?Rosie the Riveter? influencing women to take power and control their lives. Also, many politicians use loaded questions, glittering generalities and several other propaganda techniques in their political speeches to sway audiences into thinking like them. Language and our vocabulary provides a structure for thoughts, organizes our thoughts and enables one to communicate thoughts which in effect can influence thoughts by changing/ strengthening them through discussion (?Philosophy?). Does this imply that other cultures whose language does have not translations for concepts such as epistemology, quality, etc., mean they have not developed or though of those concepts yet, thus making them superior to us? ...read more.

Universalism is the idea that all independently created languages follow certain universal structures. This is supported through Noam Chomsky because he states that all language is innate thus all languages share a similar set of axioms (?Philosophy?). Finally, researchers also believe that ?linguistic events? (evidence about thought through language) must be compared independently to ?non-linguistic events? (evidence about thoughts gained through other means than language) before a correlation can be found. For example, an art piece does not have vocabulary on it but the mere sight of the image/ art piece translates and emotion or type of knowledge (Language Acquisition). Language acquisition varies from different ideologies and streams of thought, ranging from language determinism to innate language acquisition. The different modems of language acquisition play an integral role in the claim that vocabulary determines the way we think and behave. Vocabulary simply does not always restrict what we know or, vice versus. Language determinism and statements about vocabulary not encompassing all aspects of a concept favor the argument that vocabulary does shape the way we think. However, Thus, though there is validity in the claim, the knower must be aware of the limitations of the claim and the fact that knowledge can be acquired without the words or symbols we already have like universalism and translatability of certain concepts. ...read more.