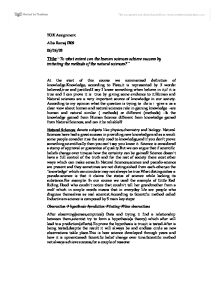 To what extent can the human sciences achieve success by imitating the methods of the natural sciences?``

TOK Assignment Alba Ramaj IB09 06/06/08 Title:``To what extent can the human sciences achieve success by imitating the methods of the natural sciences?`` At the start of this course we summarized definition of knowledge.Knowledge, according to Plato,it is represented by 3 words: believed,true and justified.I say I know something when believe in it,if it is true and I can prove it is true by giving some evidence to it.Human and Natural sciences are a very important source of knowledge in our society. According to my opinion what the question is trying to do is : -give a us a clear view about human and natural sciences role in gaining knowledge -are human and natural similar ( methods) or different (methods) -Is the knowledge gained from Human Science different from knowledge gained from Natural Sciences; and can it be reliable?? Natural Sciences denote subjects like physics,chemistry and biology. Natural Sciences have had a great success in providing new knowledge and as a result some people consider it as the only road to knowledge,and if you don't prove something scientifically then you can`t say you know it. Science is considered a stamp of approval or guarantee of quality.But we can argue that if scientific beliefs change over time,so how the certainty can be gained? Science doesn`t have a full control of the truth and for the rest of society there exist other ways which can make sense.In Natural Sciences,science ...read more.

is punctuated by revolutions.A scientific revolution happens when scientist replace a paradigm with a new one which changes the way of looking at things.This may be considered a good thing as generates the knowledge,improves it. Science is communal and self-correcting.Because sooner or later the errors of one individual will be corrected by another individual in the future. In science we can`t say about an hypothesis if it is true or not,if a scientific theory which is consistent and works in practice we should accept it as true and try to replace t in the future with a better one,so we can go closer to the truth.Science is seen as humanity`s success stories.Bertrand Russell said`Science tells us what we can know,but what we can know is little,and if we forget how much we cannot know we become insensitive to many things of great importance.` And it is impressive how people know how little are their achievements compared to their ignorance but still they don`t lose their hopes but continue.Albert Einstein observed that `All science,measured against reality,is primitive and childlike.But is the most precious thing we have.` Human Sciences includes psychology, economics, anthropology and sociology. Its purpose is to reduce the mystery by studying human behaviour in a systematic way. Personally, I study economics and economics is a brach of social science, which tried to observe people's behaviour when there is a change in prices for example:( if prises of a common product rise it is expected that the demand of buying this product will fall.) ...read more.

They change a lot but they have similarities as weel.In natural science in more likely to get to an exact conclusion while for human sciences the only conclusion you can say referring even to Ernest Rutherford is `Some do, some don`t`.It is argued that subject such as sociology, economics and anthropology even why they are a very important source about human condition, they still lack the well-established paradigms that are characteristic for natural sciences. For example: Reductionism: the ability to understand economics in terms of psychology,and physcology in temr of neuroscience etc.Human Sciences usually tend to describe things in terms of their meanings and purposes rather than ther mechanical causes and effects (natural sciences) As Human sciences are more based in meanings are more easily to get misuunderstoods of the behaviour of people as you can`t get into their head; and also they have less universal rules. Huma Sciences tend to be more biased which makes them less scientific compared to natural sciences.Human sciencies aren`t as imperfect or perfect as people say.As they deal with complex situation it is expected that they don`t have the explanaoty power of natural sciences.PERSONALLY,I think that even why Human sciences are less scientific compared to natural ones,natural sciences can never analyse human behaviour in that deep and difficult way Human Science does.But I most accept that both of the sciences are very important in giving us knowledge and generate our brain. ...read more.