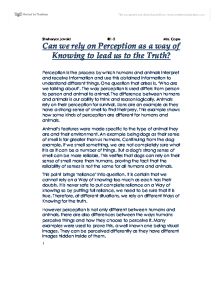 Can we rely on Perception as a way of Knowing to lead us to the Truth? Perception is the process by which humans and animals interpret and receive information and use this obtained information to understand different things. One question that arises is, 'Who are we talking about'. The way perception is used differs from person to person and animal to animal. The difference between humans and animals is our ability to think and reason logically. Animals rely on their perception for survival. Lions are an example as they have a strong sense of smell to find their prey. This example shows how some kinds of perception are different for humans and animals. Animal's features were made specific to the type of animal they are and their environment. An example being dogs as their sense of smell is far greater than us humans. Continuing from the dog example, if we smell something, we are not completely sure what it is as it can be a number of things. But a dog's strong sense of smell can be more reliable. This verifies that dogs can rely on their sense of smell more than humans, proving the fact that the reliability of senses is not the same for all humans and animals. This point brings 'reliance' into question. It is certain that we cannot rely on a Way of knowing too much as each has their doubts. ...read more.

This allows us to properly identify and use objects, but the question is how much reliance can we put into perception to help us get the truth? These senses work together to convert something into knowledge for us to use like when we recognise a book with sight and touch then read it to obtain knowledge. By seeing the textbook, then confirming this by touch, we obtain the knowledge that it is in fact a text book. With sight, touch, smell, hear and taste, we believe that we are able to see everything, as the five senses help us to prove it by each telling us a part of the truth, but there is always more than what we see. For example, if I saw someone driving a luxury car, I will most probably perceive the driver to be rich but they may be just be the owner's personal driver or even just taking it for a test drive. We see the person driving an expensive car and assume he is wealthy but that cannot always be true. With this example, it is clear that out senses cannot always be true. This example might prove how perception might not always be the best way of knowing. Is perception more reliable than other 'Ways of knowing'? Another 'Way of Knowing' is 'Reason'. ...read more.

This is when we are able to justify something using a Way of Knowing' and an 'Area of knowing', and that we put our full 'belief' in it that it is true. For instance, if I use my perception senses to look at a table and feel that it is a table, then I will believe that it is in fact a table. This is justified true belief. But truth cannot be fully obtained from one Way of knowing. Although we cannot obtain certain truth from Perception, we can obtain enough to be able to slightly prove it, a partial truth. After this we can choose to interpret it however we want to, but if knowledge obtained from perception can be supported with the other 'Ways of Knowing', such as reason, then we can get an answer which is even closer to certain truth. However if two different Ways of knowing oppose each other, then we will perceive the one which gives us a wider picture of the truth, and this Way of Knowing might be the one the individual relies on the most. For example, if we believe in Creationism but Science proves Evolution, we will probably side with our Emotions, even if we cannot prove it. The most reliable Way of knowing, in my opinion would indeed be Perception as it provides the resources we need to interpret and assume something. An example being as Language cannot be used without hearing and Reason cannot be used without any one of the senses. ...read more.