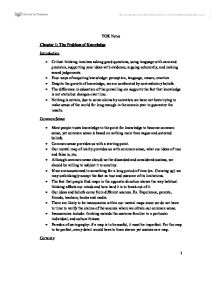 TOK Notes Chapter 1: The Problem of Knowledge Introduction * Critical thinking involves asking good questions, using language with care and precision, supporting your ideas with evidence, arguing coherently, and making sound judgements. * Four ways of acquiring knowledge: perception, language, reason, emotion * Despite the growth of knowledge, we are confronted by contradictory beliefs. * The difference in education of the prevailing era supports the fact that knowledge is not static but changes over time. * Nothing is certain, due to some claims by scientists we have not been trying to make sense of the world for long enough in the cosmic year to guarantee the results. Common Sense * Most people trusts knowledge to the point for knowledge to become common sense, yet common sense is based on nothing more than vague and untested beliefs. * Common sense provides us with a starting point. * Our mental map of reality provides us with common sense, what our ideas of true and false is, etc. * Although common sense should not be discarded and considered useless, we should be willing to subject it to scrutiny. * If we are accustomed to something for a long period of time (ex. Growing up) we may unthinkingly accept the fact as true and unaware of its limitations. * The fact that people find maps in the opposite direction shows the way habitual thinking affects our minds and how hard it is to break out of it. * Our ideas and beliefs come from different sources. Ex. Experience, parents, friends, teachers, books and media. * There are likely to be inaccuracies within our mental maps since we do not have to time to verify the claims of the sources where we obtain our common sense. * Inaccuracies include: thinking outside the customs familiar to a particular individual, and cultural biases. * Paradox of cartography: if a map is to be useful, it must be imperfect. ...read more.

This raises the question between what should be included in the curriculum and the difference between education and indoctrination. * Some argue that the hallmark of a good school is one that encourages you to question things and think for yourself. Internet * Advantage: speed and accessibility * Disadvantage: Lack of quality control. It can be a source of not only information but also disinformation. Expert opinion * A consequence of the growth of knowledge in our society is that it is no longer possible for a bright person to know everything. * Despite relying on expert opinion, we should keep in mind two things: 1. Experts are fallible and sometimes get it wrong 2. Experts have a limited range of competence. News media * We are all aware that there is some bias in both the selection and presentation of news stories. * Bad news: gives people an unduly pessimistic view of the state of the planet, create and sustain a climate of fear. * Extraordinary news: Gradual changes that may have a significance effect on people's lives tend to get little coverage. * Relevant news: Concerns domestic citizens of the same country. * Most people who follow current affairs choose outlets that reflect their pre-existing prejudices. * We should occasionally select a news outlet that has a different opinion than our own to encourage us to question our assumptions and not take our way of looking at things for granted. The limitations of second-hand knowledge * Second hand knowledge can never be an original source of knowledge. * Authority is not an original source of knowledge, our knowledge claims must ultimately be justified by perception, reason and intuition. * Problems can arise if you rely only on judgment to determine the truth. * Talking to people with different opinions may help us to improve our self-knowledge and develop a more balanced picture of the world Conclusion * The difference between knowledge and belief is one of degree rather than kind. ...read more.

* Language determines the way we think, it can be described as a form of linguistic determinism. Testing the hypothesis * The fact that groups of people have many different words for snow does not show that language determines reality, but instead suggests that reality determines language. * It might be hard to have various abstract ideas if you did not have the appropriate vocabulary where we sometimes think in images and struggle to find the appropriate words. * While language may not determine though, it might be said to predispose it. Language and values * We use language to describe the world, to persuade and influence one another. Using language to influence and persuade * Emotionally laden language: Emotive meaning can be defined as "the aura of favorable feeling that hovers about a word". * Euphemism substitutes mild or neutral sounding words for a negative sounding one. * Weasel words: Words such as many, should, and probably that people slip into sentences to give themselves an escape route. * Grammar: Grammar can affect the way people see things. * Revealing and concealing: Language can be used not only to reveal certain aspects of reality, but also to conceal other aspects by diverting attention away from them. Each description carries with it a different set of connotations, but it is possible that they all refer to the same person. Language at war * Language is not innocent and can be used to manipulate the way we see things Language is power * The seductive eloquence of the use of language reminds us that language can be used not only to educate and enlighten, but also to fuel the flames of hatred. Conclusion * Language is not as simple or straightforward as we first thought. * Some people claim that in order to know something you must be able to put it into words. * Other people insist that some of our knowledge lies beyond words. * Mystics in all great world religions have held that the deepest truths cannot be expressed in language. ?? ?? ?? ?? 1 ...read more.