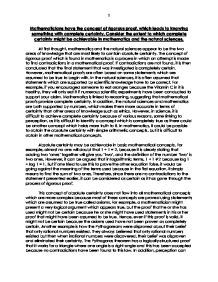 Mathematicians have the concept of rigorous proof, which leads to knowing something with complete certainty. Consider the extent to which complete certainty might be achievable in mathematics and the natural sciences. At first thought, mathematics and the natural sciences appear to be the two areas of knowledge that are most likely to contain absolute certainty. The concept of rigorous proof which is found in mathematics is a process in which an attempt is made to find contradictions in a mathematical proof. If contradictions are not found, it is then concluded that the final statement that was investigated is completely certain. However, mathematical proofs are often based on some statements which are assumed to be true to begin with. In the natural sciences, it is often assumed that statements which are supported by scientific knowledge have to be correct. For example, if you encouraged someone to eat oranges because the Vitamin C in it is healthy, they will only eat it if numerous scientific experiments have been conducted to support your claim. Mathematics is linked to reasoning, suggesting that mathematical proofs provide complete certainty. In addition, the natural sciences and mathematics are both supported by numbers, which makes them more accurate in terms of certainty than other areas of knowledge such as ethics. However, in science, it is difficult to achieve complete certainty because of various reasons, some linking to perception, as it is difficult to identify a concept which is completely true as there could be another concept which holds more truth to it. ...read more.

making it impossible to make one answer completely certain as some mathematicians might have valid reasons or proofs for their answer, although none of them could be completely certain. Concepts in the natural sciences contain less certainty than in mathematics. Science theories and results are based on experimentation because it is through this that concepts are developed. For example, a scientist can only determine the number of calories in a peanut if they actually carry out a test under perfect conditions for determining the energy released. This is different to mathematics where the knowledge is largely based on logic and reasoning and no experimentation is required. It is difficult to provide proof for knowledge based on experimentation because even if experiments are carried out under the same conditions, scientists will not obtain exactly the same answer because there are uncertainties involved, largely due to human error. Therefore, it is not possible to obtain absolute certainty in science because there is no logical structure to proofs as there is in mathematics. This is shown through Newton's Laws of Motion and Einstein's Relativity. When the Laws of Motion were tested, they were seen as certain, but it was later shown that they are only an approximation to Special Relativity which has now been superseded by Quantum Mechanics. This shows that concepts in science are never too certain because they often replaced by new theories. ...read more.

However, this is only simply because they are unaware that there is cure. From the experiments it shows that people of color are more likely to get Alzheimer's disease but this cannot be certain because they might not have been made aware of the cure. Although one assumes that once a theory or an observation is proved rigorously, it is completely certain, this is not true. This is because proving something does not make it true. It just means that you have convinced people that any evidence you have supports your conclusion. Hence, although certain concepts in mathematics might be proved rigorously, it does not always mean that they are completely certain because there are always some assumptions and an element of perception that is involved that can create some uncertainty. In conclusion, the ambiguity in many complex mathematical concepts affects the certainty in science as well as other areas of knowledge because some science concepts are based on numbers such as quantum mechanics in physics. Natural sciences are most affected by mathematics in physics because physicians use math which is not completely certain but is very accurate and hence there is always the possibility of discovering a theory which has more truth to it than the previous one. This adds to the barriers of uncertainty that exist in science. This idea leads to the connections that exist between different areas of knowledge. Experiments in biology might require knowledge of subjects from human sciences and it is difficult to state the extent to which the uncertainty in human sciences will affect the uncertainty of the knowledge in biology. ...read more.