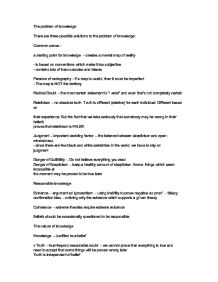 The problem of knowledge There are three possible solutions to the problem of knowledge: Common sense - a starting point for knowledge - creates a mental map of reality - is based on conventions which make it too subjective - contains lots of inaccuraccies and biases Paradox of cartography - if a map is useful, then it must be imperfect - The map is NOT the territory Radical Doubt - the most certain statement is "I exist" and even that's not completely certain Relativism - no absolute truth. Truth is different (relative) for each individual. Different based on their experience. But the fact that we take seriously that somebody may be wrong in their beliefs proves that relativism is FALSE. Judgment - important deciding factor - the balance between skepticism and open-mindedness - since there are few black and white certainties in the world, we have to rely on judgment Danger of Gullibility - Do not believe everything you read Danger of Scepticism - keep a healthy amount of skepticism. Some things which seem impossible at the moment may be proved to be true later Reasonable knowledge Evidence - argument ad ignorantiam - using inability to prove negative as proof - fallacy. confirmation bias - noticing only the evidence which supports a given theory Coherence - extreme theories require extreme evidence Beliefs should be occasionally questioned to be responsible. The nature of knowledge Knowledge - Justified true belief v Truth - true=beyond reasonable doubt - we cannot prove that everything is true and need to accept that some things will be proven wrong later Truth is independent of belief v Belief - subjective awareness - before knowledge on the belief-knowledge continuum expressing things as "probable" 3 types of belief: � Vague - charlatan theories � Well-supported - some evidence but not certain � Beyond reasonable doubt - generally believed v Justification - truth and belief must be justified. ...read more.

Language is secondary, thoughts come as images. We sometimes cannot express our ideas with words New words created and first languages arising (pre-language thought needed) Conclusion: Rather than determining thought, language more likely influences thought. It is a useful tool to enable us think. E.g. babies have some basic mathematical knowledge but are unable to multiply since they don't have the appropriate "vocabulary" Language and values Language can have great influence on people. For example, advertisers use language as an advertising tool (sparkling water, economy class in planes) Using language to influence and persuade 1) Emotionally laden language - words not only have a descriptive meaning but also an emotive meaning - that is the "aura" around the world. For example "toilet" has different emotive meaning than "restroom". Euphemisms are a kind of emotionally laden language - positively. E.g. positive - hero, love, peace negative - death, hunger, terrorist Phrasing may change the outcome in questions or surveys - it is a powerful tool of influencing people 2) Weasel words - words that are put into sentences to create an escape route. Words like "can", "should", "may" and "might" are typical E.g. "Our toothpaste HELPS fight cavity" (it is not certain) 3) Grammar - may affect the way people set things. E.g. passive may be used to escape responsibility (The city was bombed) 4) Revealing and concealing - may also influence people. Concealing undesired information and only saying positives may have a positive effect. Using euphemisims may make it easier for soldiers to kill their enemies and lose the moral responsibility. (kill = neutralize, invade = liberate, destroy = take out, dead = no longer a factor,...) Language can be used to gain power over people. It plays an important roles in our attitudes and may change our opinions. E.g. Adolf Hitler used language to gain power and manipulate people. Perception Perception is the awareness of things using the five senses - sight, sound, touch, taste and smell. ...read more.

Circular reasoning (vicious circle / begging the question) Arguing with the thing that needs to be proven. (e.g. God must exist because dictated wrote the bible) Special pleading Exceptions for certain people (e.g. politician immunity) Equivocation Word used in two different ways in an argument (A hamburger is better than nothing and nothing is better than good health => hamburger is better than good health) Argument ad ignorantiam Saying something is true on the basis thet it cannot be proved wrong. - God exists. - Do you have any proof that he does? - Do you have any proof that he does not? So he must. False analogy Using analogies that are not logically correct - only a rhetorical device (e.g. comparing rain to human problems) False dilemma Only putting something as black and white - suggesting binary thinking when there are other options as well (e.g. You either climb that tree or you will NEVER conquer your fear!) Loaded questions Questions that contain suggestions and cannot be answered in a yes/no manner while not telling anything. (e.g. Do you always cheat on your exams?) Causes of bad reasoning The main reasons are ignorance, laziness, pride and prejudice. We misuse rhetorical skills in order to persuade people - sometimes we even argue about things which we know are wrong rather than coming to the correct conclusion. Reason and certainty Laws of thought: The law of identity - If A then A. The law of non-contradiction - If A is A then it is not non-A The law of the excluded middle - Everything is either A or non-A. Nothing is both. Can deductive reasoning be doubted? "Reason is a matter of faith" Some things are unsure and unable to be categorized properly (day/night) Everything is constantly changing? Can inductive reasoning be doubted? Induction is hard to apply for all rather than all observed Prison of consistency - When you take a position on something, it is difficult to change it without losing face or to look at it from a different perspective. (It is hard to find errors in my own test) ...read more.