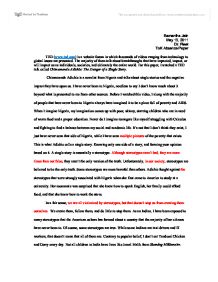 TOK Paper. The dangers of stereotypes, comments on Chimamanda Adichie: The Danger of a Single Story.

Samantha Jain May 13, 2011 Dr. Fleet ToK Absence Paper TED (www.ted.com) is a website forum in which thousands of videos ranging from technology to global issues are presented. The majority of them talk about breakthroughs that have impacted, impact, or will impact us as individuals, societies, and ultimately the entire world. For this paper, I watched a TED talk called Chimamanda Adichie: The Danger of a Single Story. Chimamanda Adichie is a novelist from Nigeria and talks about single stories and the negative impact they have upon us. I have never been to Nigeria, needless to say I don't know much about it beyond what is presented to me from other sources. Before I watched this video, I along with the majority of people that have never been to Nigeria always have imagined it to be a place full of poverty and AIDS. When I imagine Nigeria, my imagination comes up with poor, skinny, starving children who are in need of warm food and a proper education. Never do I imagine teenagers like myself struggling with Calculus and fighting to find a balance between my social and academic life. It's not that I don't think they exist, I just have never seen that side of Nigeria, while I have seen multiple pictures of the poverty that exists. ...read more.

Africa is simply associated with AIDs, starvation, and poverty. China associated with censorship and producing ninety percent of what America consumes. All of these are single stories, and they are harming the respect we give to other countries. Instead of looking at the country as a whole, and finding things that are respectable in their country, we stick with the stereotypes cause the most degradation of the country. Indirectly, and many times directly, we are insulting everything and everyone when we create a stereotype by not putting forth an effort to know the truth, the whole truth. Adichie says these single stories are caused by power, those who have power are able to express it through the single stories that are presented in our societies, and express a parental feeling on such countries who are associated with negative stereotypes. Our media, the music, movies, newsfeeds that are most commonly a part of our culture are responsible for the way we perceive other countries, if we haven't actually been to them. The most relevant example to our situation today, is the way Muslims are looked upon. When I ask my friends, who have never seen a Muslim before, what a Muslim looks like, she gave me an apt description of Osama Bin Laden, complete with a white turban, long beard, and brown skin. ...read more.

The Indian characters were continuously subliminally insulted and degraded whereas the white guy was constantly portrayed as the hero of the show. When I watched the show, I took it for its entertainment value because I know that in reality there are Indians that are extremely intelligent and capable of pronouncing Chicago correctly. However, those who haven't had any particular experiences with Indians beyond tech support and call centers will assume that Outsourced accurately represents what India looks like. Also, along with the picture of Slumdog Millionaire... the picture of India is definitely not a beautiful picture. While there is that aspect of India, it is not the only aspect. If only that feature is kept in mind, the perception of India and her citizens are negatively impacted, and will only harm our amalgamated wish to have a strong global community. As much as I am a victim of single stories, I am also guilty of blindly believing in single stories. I too blindly believed in the single story of Africa before I watched this video. It's important that when we make observations about other people, cultures, countries we keep in mind that our perception is affected by many influences and that perception should never be set in stone. ...read more.