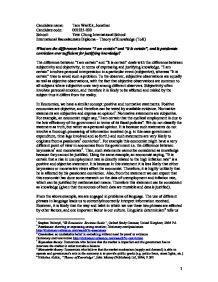 What are the differences between &quot;I am certain&quot; and &quot;it is certain&quot;, and is passionate conviction ever sufficient for justifying knowledge?

Candidate name: Tam Wai Kit, Jonathan Candidate code: 001225-020 School: Yew Chung International School International Baccalaureate Diploma - Theory of Knowledge (ToK) What are the differences between "I am certain" and "it is certain", and is passionate conviction ever sufficient for justifying knowledge? The difference between "I am certain" and "It is certain" deals with the difference between subjectivity and objectivity, in terms of expressing and justifying knowledge. "I am certain" involves personal interpretation in a particular event (subjective), whereas "It is certain" tries to avoid such a problem. To the observer, subjective observations are equally as real as objective observations, with the fact that objective observations are common to all subjects where subjective ones vary among different observers. Subjectivity often involves personal emotion, and therefore it is likely to be affected and misled by the subject thus it differs from the reality. In Economics, we have a similar concept: positive and normative statements. Positive economics are objective, and therefore can be tested by available evidence. Normative statements are subjective and express an opinion1. Normative statements are subjective. For example, an economist might say, "I am certain that the cyclical employment is due to the low efficiency of the government in terms of its fiscal policies". ...read more.

It seems that passionate conviction, in some ways, hinders our path of acquiring knowledge, and moreover, such emotional attachment is related to the use of "I am certain". However, in other areas of knowledge this is not always the case. Sometimes we need conviction in order to justify knowledge. Cyberneticians agreed that in the nervous system there is no fundamental distinction between perception and a hallucination: both are merely patterns of neural activation. However, subjectively most people have no difficulty distinguishing dreams or fantasies from perceptions.8 Then, the areas where objectivity is unable to classify will then be dependent on conviction. However, how do we distinguish between subjectivity and objectivity? How can science, being classified as the means of justifying knowledge objectively, be demarcated from other knowledge-producing systems, such as religion? Science is a way of people explicitly promotes the following: invariance, distinctiveness and controllability. However, is science always reliable, even in areas that are not bounded by science itself? How can science investigate the existence of God, if God himself is above such a system? Therefore we come to one conclusion: science might be able to prove some phenomena in the world, but it is not necessarily the only way for us, as knowers, to acquire knowledge. ...read more.

But what if this passionate conviction originates from a psychopath? His conviction might be even more consistent than any scientist on the planet, and his belief will not alter. In this case the reason suggested above will not stand but is this strong evidence we could base on when we are trying to justify his words? If he says, "I am certain that I am GOD." and he believes he has the power of controlling the world, then undoubtedly this is not knowledge Since it cannot be justified by the other three ways of knowing. For example, how can it be logical that GOD lives on this planet and unable to free himself from a psychiatric hospital? That certainly does not make sense, and in these examples passionate conviction will lead us to nowhere. Although this is an extreme case, it is also applicable to people who ignores all objective evidence on certain "facts" and struggle to keep their opinions in place. I am certain that there is sufficient evidence to prove that being engaged in subjectivity will not necessarily lead to knowledge and to have a better description of reality, objectivity is a more approachable way of knowing. However, it is also certain that being conviction-driven, although some occasions emotion being a hinder to knowing, can also be a tool to justifying knowledge. ...read more.