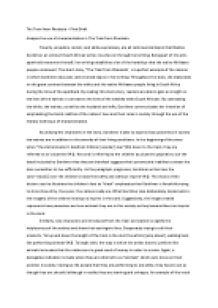 Analysis of The Train from Rhodesia by Nadine Gordimer

﻿The Train from Rhodesia ? Final Draft Analyze the use of characterization in The Train from Rhodesia Poverty, prejudice, racism, and white-supremacy, are all controversial topics that Nadine Gordimer, an eminent South African writer, touches on through her writing. Being part of the anti-apartheid movement herself, her writing establishes a lot of the hardships that the native Afrikaans people underwent. The short-story, ?The Train from Rhodesia?, is a perfect example of the manner in which Gordimer discusses controversial topics in her writing. Throughout the story, she elaborates on the great contrast between the white and the native Afrikaans people living in South Africa during the time of the apartheid. By reading this short-story, readers are able to gain an insight on the lives of the natives in contrast to the lives of the wealthy white South Africans. By contrasting the white, the natives, as well as the husband and wife, Gordimer communicates her intention of emphasizing the harsh realities of the natives? lives and their roles in society through the use of the literary technique of characterization. By utilizing the characters in the story, Gordimer is able to express how powerless in society the natives are in addition to the severity of their living conditions. In the beginning of the story when ?the stationmaster?s barefoot children [wander] over?(41) down to the track, they are referred to as ?picannins?(41). Not only is referring to the children as picannins pejorative, but the detail included by Gordimer that they are barefoot suggests their poverty and inability to obtain the bare necessities to live sufficiently. As the paragraph progresses, Gordimer writes how the sand ?close[s] over the children?s black feet softly and without imprint?(41). ...read more.

Even the position of the woman being above him explicitly indicates her status which is above his. Pursuing this further, the young woman says no to the old man and explains that it is ?too expensive, too much? as she ?[shakes] her head and raise[s] her voice to [him]?(43). The readers know that the young woman has enough money to pay the price the old man is asking for; therefore, it shows a great contrast in her wealth and his poverty. In the same way, the manner in which she raises her voice to him affirms the authority and control that she has over the helpless old native man. Also, the young woman?s husband loudly insists, ?Three-and-six??(43) as though he is extremely shocked with the high price of the lion. Although he is capable of buying it for its original value, he knows he has a chance to reduce the price and pay for a lesser value. Blatantly, he tries to bargain with the man which again confirms the poverty and lack of power. With regard to the white people, it is apparent that they are not concerned with the wellbeing of the locals which puts emphasis on their irrefutable reality. For instance, in the story, ?a girl [collects] a handful of the hard kind, that no one like[s], out of the chocolate box, and throw[s] them to the dogs??(43). Although the white girl is relatively young, she is oblivious to the fact that she is wasting precious food that the natives would greatly appreciate. Instead of giving the chocolate to the native children or to the natives in general, she throws them to the dogs. ...read more.

What makes her particularly infuriated and remorseful is that she knows they are much wealthier compared to the natives and still her husband chooses to bargain for the lion. Consequently, her husband is ?shocked by the dismay of her face?(45) as if he believes that he has done nothing wrong. Although she sees his callousness for being entertained by a bargain, he is confused by her shock which implies that the natives are that insignificant to him. Just like most of the white people in South Africa during the apartheid, he believes that there is nothing wrong with the corrupt black natives. Thus, his enjoyment is his prime concern instead of the awful lives the natives live. In conclusion, the contrast between the husband?s coldness and the wife?s compassion towards the natives, expresses how unimportant the natives are which emphasizes their struggle in this society. In final analysis, Gordimer uses the literary technique of characterization as a tool to develop her intention that the natives? role in society and their exigent reality are partial. She shows this through through the white characters and the native characters. Gordimer?s influence from the anti-apartheid has permitted her to strengthen her messages of prejudice, racism, and poverty in her writing. Through her stories including ?The Train from Rhodesia?, she has been able to transfer the struggle the natives faced during the apartheid movement and illustrate how much of a contrast there was between the two races. Every day, people are spreading anti-racist messages to improve the society humans live in. Now, owing to Nadine Gordimer, readers can take this information in to fully understand the struggles of those who are victims of prejudice. Word Count: 2,782 Tina Varkevisser 11-2 ...read more.