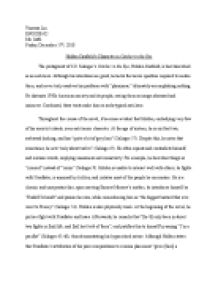 Holden Caufield's Character in Catcher in the Rye

﻿Vanessa Lin ENG2DE-02 Ms. Joffe Friday, December 17th, 2010 Holden Caufield?s Character in Catcher in the Rye The protagonist of J.D. Salinger?s Catcher in the Rye, Holden Caufield, is best described as an anti-hero. Although his intentions are good, he lacks the heroic qualities required to realize them, and never truly resolves his problems with ?phoniness,? ultimately accomplishing nothing. He distrusts 1950s American society and its people, seeing them as image-obsessed and insincere. Combined, these traits make him an archetypical anti-hero. Throughout the course of the novel, it becomes evident that Holden, embodying very few of his society?s ideals, is an anti-heroic character. At the age of sixteen, he is six foot two, awkward-looking, and has ?quite a bit of grey hair? (Salinger 57). Despite this, he notes that sometimes, he acts ?only about twelve? (Salinger 9). ...read more.

After losing fights, he pretends to be wounded; when he is punched, he thinks that he is dying, and subsequently ?sort of [starts] pretending [to have] a bullet in [his] guts? (Salinger 103-104). Holden fulfills his role as an archetypical anti-hero not only because he lacks heroic traits, but also by criticizing the society that he lives in. A major focus of the novel?s plot is the insincerity, or ?phoniness? of people in 1950s America. As an anti-hero, Holden distrusts society and the people around him, condemning the hypocrisy of other characters? interactions and the social practices of the time. He ?hate[s] the movies like poison? (Salinger 29) because of the actors, thinking that they ?do something phony every minute? (Salinger 117). Similarly, when asked whether he wants to be a lawyer, he refuses, asking ?How would you know you weren?t being a phony?? (Salinger 172). ...read more.

His choice to think of Phoebe?s future rather than ?phoniness? represents his greater realization that, in reality, the ?catcher in the rye? cannot exist. Holden expresses this when he muses that ?the thing with kids is ... you have to let them do it, and not say anything. If they fall off, they fall off, but it?s bad if you say anything? (Salinger 211). Although he does not accomplish his goal, Holden is an honourable failure; his recognition of the impossibility of his dream allows him to mature as a person and move on with life. Holden?s character is distinctly anti-heroic. He is disillusioned, heavily flawed, and critical of the people he encounters and the society that he lives in. Because of this, he fails to achieve his one true goal, instead realizing that ?phoniness? is something he cannot prevent. Ultimately, Holden Caufield?s lack of heroic qualities, criticism of society, and failure make him an archetypical anti-hero.p ...read more.