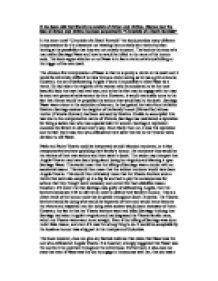 In the short novel “Chronicle of a Death Foretold” the book provides many different interpretations for it’s characters not viewing them entirely as a victim but also hinting at the possibility that they are not entirely innocent. The book is the story of a man called Santiago Nasar and how he would be killed in the name of the honour code. The book argues whether or not Nasar is in fact a victim of a brutal killing or the trigger of his own death.

The obvious first interpretation of Nasar is that he is purely a victim in his death and it would be extremely difficult to view him as a victor seeing as he has a grim outcome. However, the act of deflowering Angela Vicario it is possible to view Nasar as a victor. He had taken the virginity of the woman who is considered to be the most beautiful lady the town had ever seen, and to be the first man to engage with her may be seen as a personal achievement by him. However, it would eventually come to the fact that this act would’ve propelled the actions that would lead to his death. Santiago Nasar was a victor in the seduction of women; he had gained his traits from his father Ibrahim. Santiago desires the daughter of his family’s cook (Divina Flor) whose mother (Victoria Guzman) had been seduced by Ibrahim. Unable to accomplish this task due to the overprotective nature of Victoria, Santiago has maintained a reputation for being a ladies man who has a special talent in women. Santiago’s reputation succeeds his fathers in almost every way. More likely than not, it was this reputation and the fact that it was him who deflowered their sister that led to the Vicario twins decision to kill Nasar.

Pablo and Pedro Vicario could be interpreted as cold-blooded murderers, or in fact overprotective brothers upholding their family’s honour. As murderers they would be the victims of their own actions and their sister’s deceit. The reader may interpret that Angela Vicario may have been lying about losing her virginity and blaming it upon Santiago Nasar. This would mean that the killing of Santiago was a murder with an accidental reason. This would then mean that the indirect murderer would have been Angela Vicario. This would then ultimately mean that the Vicario brothers were a victim that were also caught up in a big lie and had to pay the consequences for actions that they thought were necessary and correct but had a falsified reason. However, if it were true that Santiago was guilty of deflowering Angela, then the brothers would see it fit to kill him in order to defend their family’s honour. This is a direct result of the honour code that is upheld throughout South America. The Vicario brothers would be doing what would be expected of them and would hence become the victors and respected men for doing what society would deem necessary of them. However, the fact is that the Vicario brothers went and killed Santiago thinking that Santiago had taken Angela’s virginity and had disgraced the Vicario family name, which the Vicario twins went to set straight. Even if the killing of Santiago was done under false reason, and even if it was the wrong thing to do. It would be acceptable by the locals as honour was a big part in the rural parts of Colombia.

The book however, does not give any factual evidence that states that Nasar was the one who deflowered Angela Vicario. It is however, strongly suggested that Nasar was the one but it is uncertain throughout the entire book. Furthermore, it also does not state that even if Nasar was the one to engage in intercourse with her, that she was a virgin or is still not virgin in the first place. Angela Vicario did not want to marry Bayardo San Roman, and it is possible that she could have made up the story about Nasar given his reputation in order to make her default the marriage for “it was Angela Vicario who didn’t want to marry” Bayardo. Nasar may not have been the man to deflower Angela, or if Angela was even deflowered. Angela hesitates to find a scapegoat to blame for her deflowering, this is shown when she “took the time necessary to say the name” and “looked for it in the shadows”. This shows that she may have been looking for a name and picked Santiago Nasar because of his reputation with women and how he would be the most believable target.  Santiago may have been falsely accused of a dishonourable act that he didn’t do, which could mean that he actually was the victim and was caught up in one big lie.

Angela Vicario may have been a victim of male power or a victor in a situation that she herself had carefully manipulated. If Nasar was the one to deflower her, then the fact that she didn’t mention his name sooner until placed under tremendous pressure may have meant that they had a secret relationship of sorts. Angela was forced to reveal the identity of her deflowerer and may not have even wanted to say Santiago’s name. If this were to be true, then Angela would have been a victim to male power to some degree. She would have been a victim to Santiago’s charm regardless of his somewhat negative reputation. Santiago may have even manipulated Angela to somehow loving him. However, the case can easily be the other way around. Furthermore, she could be a further victim to Bayardo San Roman. Bayardo offered his hand in marriage to her and was pressured by her family to accept, even if it was not what she would want. She would be a victim under the power Bayardo brings with his wealth and status, which would be beneficial to the family but not at all beneficial at all emotionally to Angela.

In contrast, Angela may be viewed as the victor of the situation being able to manipulate those around her to believe that Santiago was the one to deflower her, hence defaulting her marriage. She would be able to avoid any male manipulation externally, from Santiago and from Bayardo. Angela had found a way out of her marriage to retain her freedom from a man she didn’t love and possibly get rid of a man she despised; Santiago after constantly refusing his previous advances. However, the big lie that Angela had possibly created meant that her own reputation might be tarnished, as word would get out that Santiago was the one that deflowered Angela. It would also take extreme courage in order to tell the truth if she was in fact lying about everything. Most likely, she would continue to play along with the lie and take it to her grave if it indeed was a lie.  Her reputation as not being a virgin anymore would severely decrease her marriage chances because the rich men with high class such as Bayardo were looking fro virgins to marry and to keep them for themselves.

Overall, several characters within “Chronicle of a Death Foretold” can be portrayed as both a victor and a victim. This is because the book never gives only one direct, simple interpretation leading to some readers believing the most likely one while ignoring the significant other. However, most of the book revolves around the potential lie that Angela Vicario had told her brothers which set a chain of motions into action.