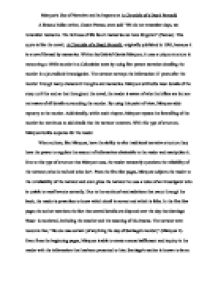 M�rquez's Use of Narrative and its Impacts on A Chronicle of a Death Foretold A famous Italian writer, Cesare Pavese, once said "We do not remember days, we remember moments. The richness of life lies in memories we have forgotten" (Pavese). This quote is like the novel, A Chronicle of a Death Foretold, originally published in 1981, because it is a novel formed by memories. Written by Gabriel Garc�a M�rquez, it uses a unique structure in recounting a 1950's murder in a Columbian town by using first person narration detailing the murder in a journalistic investigation. The narrator conveys the information 27 years after the murder through many characters' thoughts and memories. M�rquez withholds most details of the story until the end so that throughout the novel, the reader is aware of who the killers are but are not aware of all details surrounding the murder. By using this point of view, M�rquez adds mystery to the murder. Additionally, within each chapter, M�rquez repeats the foretelling of the murder but continues to add details that the narrator uncovers. With this type of structure, M�rquez builds suspense for the reader. When authors, like M�rquez, have the ability to alter traditional narrative structure they have the power to regulate the amount of information obtainable to the reader and manipulate it. ...read more.

Many of the characters in the novel begin to contradict one another with their recollections, leaving the question of who has the correct memory. At many times, the narrator offers the reader details without elaborating on them or explaining why they are significant to the case. The narrator gives the reader an example of the inconsistencies when he says that "many people coincided in recalling that it was a radiant morning with a sea breeze... But most agreed that the weather was funeral, with a cloudy, low sky" (2). On the other hand, one could argue that in A Chronicle of a Death Foretold M�rquez writes the narrator as someone who is more interested in discovering the reasons behind the murder then recording factual information, so one most wonder, are the specifics of the day as important? Usually, journalists and investigators are supposed to remain objective in terms of the case they are investigating. However, M�rquez does not do this with the narrator of A Chronicle of a Death Foretold. Instead, the narrator inputs his opinion into the story often, saying "[his] personal opinion is that [Santiago] died without understanding his death" (118). By offering his "personal opinion" (118) it is revealed that the reader is led by a biased investigator when objectivity is vital for success in an investigation. ...read more.

M�rquez creates a complex narrative structure, by using an ambiguous plot he is able to demonstrate how difficult it is investigating a crime of the past. A common phrase used to illustrate putting something back together is fitting the pieces like a puzzle. The narrator attempts "to put a broken mirror of memory back together from so many scattered shards" (5). Those who have dropped a piece of glass know that putting the pieces back together is nearly impossible, the ends are sharp and pieces are sure to have flown to areas one would not look for them. The image of a puzzle is one with perfectly fitted pieces interlocked together cannot correspond with the one of the mirror, distorted and broken. This analogy shows the difficulty of what the narrator is trying to accomplish in A Chronicle of a Death Foretold. Trying to discover the truth of an event nearly 27 years after it occurred is very near impossible. Just as impossible as trying to piece a mirror back together. Additionally, M�rquez withholds details from the reader and uses repeated foreshadowing and retells the plot of the story to add anticipation for the reader. By having the narrator use this style and technique of writing, M�rquez shows the inability to reassemble the past. Word Count: 1,329 ...read more.