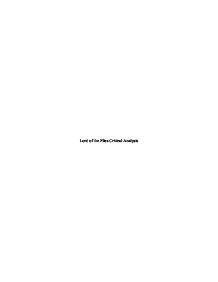 Lord of the Flies Critical Analysis

Lord of the Flies Critical Analysis Title: Lord of the Flies is an important title for the novel because it is one of the most important symbols in the novel. The Lord of the Flies, or the pig's head, is symbolic because it embodies the savagery that is the result of Jack's corruption and lust for blood. As Simon attempts to talk with it, he hears voices in his head of the pig saying there's no way to escape: "This is ridiculous. You know perfectly well you'll only meet me down there-so don't try to escape!" The author puts this line in the novel because like most the other boys in the society, he would soon submit to the savagery that now overwhelmed Ralph's and Piggy's true leadership. Author: William Golding First Publication Date: 1954 Characters: Jack is the power-hungry boy who is absorbed in his self-pride. He establishes himself as the head of the choir, holding a respectable place of leadership amongst them. However, he is not chosen for chief because he is not thought of as interesting amongst the littler kids. He is outraged at the election of Ralph as leader, but submits to a position of semi-leadership over the hunters of the group. On his first expedition up the mountain, he, Ralph and Simon come across a pig stuck in an entanglement of vines. Jack hesitates to kill it, which signifies his ongoing attachment to sanity and to the composure of decency. However, this hesitancy is short-lived as he gains his own egomaniac ideas about killing and hunting. He becomes bloodthirsty, basing his own principles on gathering meat with his hunters. His position of power shifts gradually throughout the book. As he gains more success in hunting and as he assumes a more savage role, he gains much more influence over the other boys in the group, whom he eventually aggregates to his own tribe. ...read more.

However, it has a double meaning. It represents the failure of motivation and the change in direction the boys take in how they choose to live on the island. Ralph's clear motivation in attempting to get the boys to see the true goal of survival makes him a great leader, and through his speeches, he demonstrates this. "All at once, Robert was screaming and struggling with the strength of frenzy. Jack had him by the hair and was brandishing his knife. Behind him was Roger, fighting to get close. The chant rose ritually, as at the last moment of a dance or a hunt. 'That was a good game' [said Jack]." This quote addresses the inhumaity the boys undertake as they undergo their fight for survival. In a mock re-enactment of the murder of the pig, the boys bully Robert, thinking that it's okay to do so-that it's just fun and games. Jack certainly takes light to it; he even takes out his knife, making it seem like a very real enactment: "struggling with the strength of frenzy." The diction Golding uses in this quote infers intensity at which the boys act and with how their personality changes drastically. Golding describes their re-enactment not as play, but as a 'ritual chant.' This kind of imagery has a dark feel to it, and Golding is most likely trying to convey that although the boys may think that they act for fun and games, their actions are vile and dark. Archetypes: King/Ruler: Power is one of the most important factors in the novel that contributes to the conflict between civility and savagery. Ralph and Jack from the start argue with one another on how the society should run. Ralph's way of running things is very much like society should run. He suggests the ideas of building shelters, keeping a constant fire to serve as a beacon to passing ships, as well as the conch system of speaking. ...read more.

He wonders if it would be possible at all to come up with some sort of compromise with Jack and the boys. He imagines that the now savages are civilized boys again. As he laughs to himself, he realizes the impossibility of this occurrence. Golding's diction once again shows itself as he talks about death. He describes their fear as the 'horrors of death.' Because he is able to make the distinction between what they fear and what he knows as reality, he considers himself an outcast from the rest. Ralph then notes the ocean and the reality of the presence of their strandedness on the island. He describes an 'acrid' scent, and the 'boiling' ocean as he recognizes that his sensibility has reasoning, and that the other boys are blind to their situation. As he continues walking along, he approaches their settlement, and hears the familiar chant that the boys now know as their motto of savagery. Golding's harsh diction makes another appearance in describing Ralph's thoughts on their settlement. Even though he does not see the settlement, he imagines "a dark circle, a glowing fire" two ideas which contrast each other very well. The dark circle represents the boys' new loyalty and ideals. The glowing fire represents the symbolism of a home, and a place of safety, a safety that Ralph is now no longer a part of. The final section of the passage represents a finality of the situation. The final two boys who had been loyal to Ralph were now part of Jack's tribe, part of the new civilization. Golding uses harsh words to describe this finality: "he[Ralph] accepted this new fact like a wound" These words represent the loss of the last hope that might have existed for a proper society based on laws of civility, and not of savagery. "Samneric were savages like the rest; Piggy was dead, and the conch smashed to powder." This is the last statement that Ralph gives concerning their situation and the failure of civility to overcome savagery in their society. ?? ?? ?? ?? ...read more.