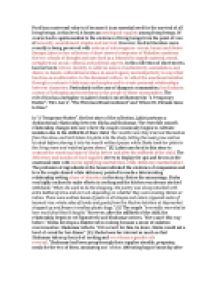 Portrayal of Food in Literature

﻿Food has a universal value to it because it is an essential need for the survival of all living beings. At this level, it forges an ontological equality among living beings. Of course food is quintessential to the existence of living beings from the point of view of necessity, nourishment, staples and survival. However, food in literature more recently is being perceived with notions of extravagance- excess, luxury and desire. Jhumpa Lahiri in her collection of short stories Interpreter of Maladies combines the two schools of thought and uses food as a leitmotif to signify material, moral, metaphysical, social, cultural, and political aspects. In this collection of short stories, food serves to retrace identity, to address issues of authenticity, assimilation, and desire, to denote cultural hierarchies, to assert agency and subjectivity in ways that function as an alternative to the dominant culture, to reflect the emotional isolation through a contrast of deficiency and surplus and to create personal relationships between characters. Particularly in the case of diasporic communities, food induces a sense of belonging and rootedness in the people of these communities. The role of food as a metaphor in Lahiri?s book is most illustrated in ?A Temporary Matter?, ?Mrs. Sen?s?, ?The Third and Final Continent? and ?When Mr. Pirzada Came to Dine.? In ?A Temporary Matter?, the first story of the collection, Lahiri portrays a dysfunctional relationship between Shoba and Shukumar. The erstwhile smooth relationship changes into one where the couple consciously begins to cultivate isolation due to the stillbirth of their child. ...read more.

Sen as well. In Mrs. Sen?s case, food also becomes an alternative means for her to exert her agency in the dominant American culture. It is through food she tries to create her own identity. Her preparation of food is a culinary act that reaches across continents to places where women sit on rooftops with blades and vegetables slicing through the night. Interestingly, in the entire story, Lahiri narrates only about the ingredients of food but never food itself except for a rare occasion, which goes on to show the emphasis placed on food preparation. Also, in contrast to ?A Temporary Matter? where culinary knowledge facilitates Shoba?s flight, culinary knowledge in Mrs. Sen?s case strengthens her ethnic identity. Eliot is appreciative of Mrs. Sen because of her culinary knowledge and he dislikes the fact that his mother does not possess any. ?The first thing she did when they were back at the beach house was pour herself a glass of wine and eat bread and cheese, sometimes so much of it that she wasn?t hungry for the pizza they normally ordered for dinner.? Mr. Sen was initially unaware of Mrs. Sen?s connection with her food but he realizes it gradually and intentionally takes her to the fish market to buy ample amount of fish when she was unhappy having pondering over the letter. While food preparation dominates the aforementioned stories, food-consuming habits dominate 'The Third and Final Continent'. In this story, the narrator and his wife Mala are trying to retain their cultural identity in a foreign atmosphere. ...read more.

Pirzada later that his family was fine, ?she prepared a special dinner that evening.?(42) Mr. Pirzada was most significantly affected by the news and the pumpkin symbolized his emotional distress in a most vivid manner. The grimace on the pumpkin ?straight across, neither mournful nor friendly? is subtly suggestive of Mr. Pirzada?s facial expression having known the poor condition in Bangladesh. The news of the war made the knife slip from Mr. Pirzada?s hand making the pumpkin bear ?an expression of placid astonishment, the eyebrows no longer fierce, floating in frozen surprise above a vacant geometric gaze.? When Lilia came back from tricking-n-treating she found the pumpkin ?shattered, its thick shell strewn in chunks across the grass,? suggesting the emotional state of Mr. Pirzada who was absolutely dejected by the news of the war breaking out. Lahiri has been able to use food as a metaphor with great skill in her works. Food runs as a leitmotif throughout her stories with differential intensity. Food serves as a metaphor for different events in each story, yet holding a common symbolic meaning. The types of metaphor used in the story are based on the context of the piece and emphasis on onomatopoeic, visual or gustatory effects. Food determines the relationship between characters, sets the context, setting and tone and most importantly runs through all the stories acting as an adhesive to bind them all. The emphasis on food facilitates the setting of the stories in a foreign land inhabited by Indian nationals because food continuously helps them retrace their identity. The representation of emotional state of characters through food helps in the development of the characters in each story. ...read more.