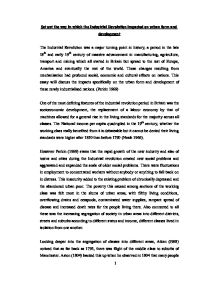 Set out the way in which the Industrial Revolution impacted on urban form and development The Industrial Revolution was a major turning point in history, a period in the late 18th and early 19th century of massive advancement in manufacturing, agriculture, transport and mining which all started in Britain but spread to the rest of Europe, America and eventually the rest of the world. These changes resulting from mechanisation had profound social, economic and cultural effects on nations. This essay will discuss the impacts specifically on the urban form and development of these newly industrialised nations. (Perkin 1969) One of the most defining features of the industrial revolution period in Britain was the socioeconomic development, the replacement of a labour economy by that of machines allowed for a general rise in the living standards for the majority across all classes. The National income per capita quadrupled in the 19th century, whether the working class really benefited from it is debateable but it cannot be denied their living standards were higher after 1850 than before 1790 (Neale 1966). However Perkin (1969) states that the rapid growth of the new industry and also of towns and cities during the Industrial revolution created new social problems and aggravated and expanded the scale of older social problems. ...read more.

The local government published a model set of bylaws after the 1975 Public Health Act which influenced the evolution of existing building codes. Effectively from the 1870's onward, urban building in Britain was governed by regulations that didn't vary a lot place to place. (Perkin 1969) Now as building regulations developed, they increasingly sought to regulate the urban form, the arrangement of housing and the spaces that lay between them. Ventilation was the main objective as medical authorities believed the reason diseases spreads was through vapour transmissions emitted from putrefying matter. So to counter this in the urban environment, there was an attempt to ensure there was free movement of air around the home (Sutcliffe 1981). The best ways to do this it was thought was by making the house face a broad street and have an open space behind it, so that draughts of wind could blow through the house. As a result Sutcliffe states the Town Improvement Clauses Act suggests a width of 30 feet for all streets for traffic and 20 feet for streets with no traffic. Open areas behind homes were strong resisted , as the 1840's "back to back" arrangement which was two rows of houses which shared the same wall had becomes the normal type of housing for workers in the bigger industrial urban areas. ...read more.

He wanted to surround each community with permanent agricultural land. Howard hoped these reforms would get rid of slums and provide better working and living conditions for workers. The first town to be modelled on this plan was Letchworth in 1904 which is located some thirty miles north of London. Garden cities sprang up over the world as well including Germany, Australia and the US to a smaller degree. Garden Cities is stated to be the origin of Regional Planning thought and the theory of garden cities is used today in planning suburbs (Sutcliffe 1981) In conclusion there has been massive and continuous change in the urban form and development in Britain as well as in other countries through the Industrial Revolution. Urban areas were the location of key industry in the nation which brought workers in from the rural areas. Mass urbanisation increased the size of these cities and towns but also created social problems like poverty, overcrowding and spreading of disease among the working class. The Industrial Revolution was also possibly the first instance of land use segregation in Britain. Ebenezer Howard and his Garden City idea were in response to the poor living conditions of the slums and while Garden Cities did not become a widespread idea, it did influence modern planning thought today. ...read more.