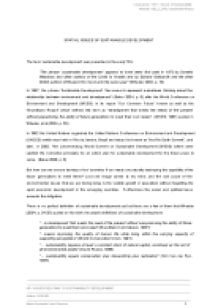 ﻿Coursework: CW1 ? Issues of Sustainability Module: UEL_7_SPL Sustainable Places SPATIAL ISSUES OF SUSTANAIBLE DEVELOPMENT The term ?sustainable development? was presented in the early 70?s: ?The phrase ?sustainable development? appears to have been first used in 1972 by Donella Meadows and other authors of the Limits to Growth and by Edward Goldsmith and the other British authors of Blueprint for Survival in the same year? (Wheeler 2004, p. 19) In 1987, the phrase ?Sustainable Development? ?has come to represent mainstream thinking about the relationship between environment and development? (Baker 2004, p. 6) after the World Conference on Environment and Development (WCED) in its report ?Our Common Future? known as well as the ?Brundtland Report? which defined this term as ?development that meets the needs of the present without jeopardizing the ability of future generations to meet their own needs? (WCED, 1987) quoted in Wheeler et al (2004, p. 53) In 1992 the United Nations organised the United Nations Conference on Environment and Development (UNCED) which was held in Rio de Janeiro, Brazil and today it is known as ?the Rio Earth Summit?, and later, in 2002, ?the Johannesburg World Summit on Sustainable Development (WSSD) where were spotted the normative principles for an action plan for sustainable development for the future years to come. (Baker 2008, p. 6) But how can we ensure develop of our countries if our needs are actually destroying the capability of the future generations to meet theirs? ...read more.

(Efficiency and waste of corporate resources) 3. New impetus to influence consumption patterns, including proposals for new advice to consumers 4. New commitments on sustainable procurement in the public sector so that the UK is a leader within the EU for 2009 5. Support innovation for new products, materials and services 6. Encourage stronger partnerships with key business sectors such as food, tourism and construction, and 7. A review of our strategy in terms of waste, with growing emphasis on reducing waste at the point of origin and use of waste as a resource. The British government has committed to reduce greenhouse gas emissions in the country. In its White Paper on Energy, 2003, the Government gave priority to a low carbon economy in its strategy of energy and agreed a long-term goal of decreasing the emissions of carbon dioxide by about 60% to about 2050, with tangible improvement to be revealed in 2020. (HM Government 2005, p.8) A growing perception has seen (in the last 20 years) that the current model of development is unsustainable. ?On the one hand we see the increasing burden our way of life places on the planet on which we depend? (HM Government 2005, p.12): 1. The consequences of climate change is now inevitable 2. The growing strain on resources and environmental systems - water, earth and air - caused by the way we produce, consume and waste of resources, and 3. ...read more.

We should give a step forward and respond to this challenge and therefore achieve the correct balance to make a better life for present and future generations. The pressures and need for urban development should be made treating with caution the issues and problems that arise with it for the progress. The spatial planning regulation in the UK attempts to achieve its goals by the implementation of several strategies to reach the sustainable stage. However, one of the most important considerations is the fact that future generation will need resources to survive and the best policy to achieve it would be recycling and reusing the existing resources in the best way possible. The world requires a new ideology to achieve the economic development and the preservation of the environment in order to realise the sustainable development. There are many ways in which developers can minimise the harm to the environment through an environmental impact assessment which analyse how the development will affect the environment and try to avoid at all means. Also, the introduction of a well proper and design plan which considers the environmental issues will mean to find any other alternatives less risky to the environment. The developers are the key to success but it hard for them to keep them interested in developing sustainable places as the profits are committed with their costs. Other policies should encourage them to invest their money in creating quality spaces for people as the physical looks of the development should create a positive atmosphere for future developments on the area. ...read more.