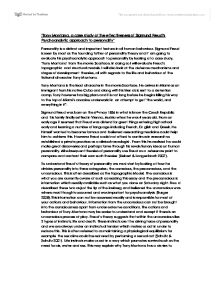 Tony Montana, a case study of the effectiveness of Sigmund Freud(TM)s Psychoanalytic approach to personality(TM)

'Tony Montana, a case study of the effectiveness of Sigmund Freud's Psychoanalytic approach to personality' Personality is a distinct and important feature in all human behaviour. Sigmund Freud is seen by most as the founding father of personality theory and I' am going to evaluate his psychoanalytic approach to personality by looking at a case study, 'Tony Montana' from the movie Scarface. In doing so I will evaluate Freud's topographic and structural models. I will also look at the defence mechanisms and stages of development theories, all with regards to the life and behaviour of the fictional character Tony Montana. Tony Montana is the lead character in the movie Scarface. He arrives in Miami as an immigrant from his native Cuba and along with his friends is sent to a detention camp. Tony however has big plans and it is not long before he begins killing his way to the top of Miami's cocaine underworld in an attempt to get "the world, and everything in it". Sigmund Freud was born on the 6th may 1856 in what is know the Czech Republic and his family finally settled in Vienna, Austria when he was 4 years old. From an early age it seemed that Freud was distend for great things entering high school early and learning a number of language including French, English and Greek. ...read more.

However occasionally he does show he has some sort of morals, when he prevents the killing of a women and children for example. His ego is present as it allows him to satisfy id impulses but in a manner which will prevent him being caught. Examples of this are when he kills the communist party member in the prison camp, he waits until there is a riot so it is harder for him to be shown as the culprit. However the ego tends to come and go, for example when he attempts to kiss his bosses wife and when he shoots a gang member in the middle of the street in front of numerous witnesses. The fact that both Tony's ego and superego come and go could show that there are limitations to Freud's structural model and perhaps there are other factors at play. In order to keep unwanted desires hidden or in the unconscious Freud believed the ego used techniques called defence mechanisms. I will now look at some of these defence mechanisms and look at how these could be applied to our character Tony Montana. Repression is an involuntary removal of something from the conscious which brings pain to an individual. ...read more.

At the phallic stage he may not have developed a fear of his father, due to his absences and this may explain Tony's lack of conscience. A criticism of this theory is that it try's to place people into one category for example people with an oral fixation will constantly put things to their mouth. In reality however people often display affects of more than one of the stages, such as our character Tony Montana. In conclusion Freud's psychoanalytic approach is still useful even today. It allows basic Insights into why individuals act in the way they do. Using Freud's approach you would be able to predict the absence of the father in the character of Tony Montana and perhaps even the negative relationship he has with his mother. We can also explain why Tony acts in the violent and destructive manner that he does and maybe even begin to believe that it's not his fault. However this approach does have limitations and our character has demonstrated this. With regards to the structural model both Tony's ego and superego come and come with such random frequency it is hard to believe such a rigid model. In addition to this Tony displays fixation and affects of a number of the stages of development and again this brings suspicions that other factors may be at play. ...read more.