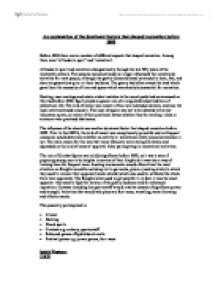 An explanation of the dominant factors that shaped recreation before 1800

An explanation of the dominant factors that shaped recreation before 1800 Before 1800,there were a number of different aspects that shaped recreation. Among them were 'attitudes to sport' and 'recreation'. Attitudes to sport and recreation changed vastly through the last fifty years of the nineteenth century. The seasons and countryside no longer influenced the recreational activities for most people, although the gentry (leisured class) continued to hunt, fish, and shoot as generations prior to them had done. The gentry had often owned the land which gave them the necessity of time and space-which was absolutely essential for recreation. Hunting, race meetings and estate cricket matches in the countryside had commenced as they had before 1800. ...read more.

The role of Combat Sports was mildly significant before 1800, as it was a way of preparing young men to be knights in service of their king/lord-it was also a way of training them for frequent wars. Jousting tournaments would often attract the most attention, as Knights would be suited up in tin garments, given a jousting stick (in which they used to remove their opponent) and a shield (which was used to withhold the attack from their opponent). The Knights never used to get paid for it; in fact, it was the exact opposite- they used to fight for honour of the public audience and for enhanced reputation. Contests including the quarterstaff would involve classes of significant power and strength. ...read more.

Basically, cricket was the only obvious sport in which both peasantry and gentry would combine. I have proved that there were a significant amount of dominant factors that had shaped recreation before 1800. Amongst those, which I haven't mentioned, are The Age of Enlightenment and Recreational Characteristics (both upper and lower classes). I have gathered that although the peasants worked throughout the week they still made time to participate in recreational activities, it was as if they were still at work only not getting a wage at the end of it. The gentry made the point that as long as you've got the key essentials for recreational activities then you could take part as you wish- time and space. Isaiah Westcarr 12KH ...read more.