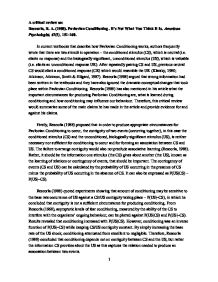 A critical review on:

In current textbooks that describe how Pavlovian Conditioning works, authors frequently wrote that there are two stimuli in operation – the conditioned stimulus (CS), which is neutral (i.e. elicits no response) and the biologically significant, unconditioned stimulus (US), which is valuable (i.e. elicits an unconditioned response UR). After repeatedly pairing CS and US, previous neutral CS would elicit a conditioned response (CR) which would resemble the UR (Klatsky, 1980; Atkinson, Atkinson, Smith & Hilgard, 1987). Rescorla (1988) argued that wrong information had been written in the textbooks and they have also ignored the dramatic conceptual changes that took place within Pavlovian Conditioning. Rescorla (1988) has also mentioned in his article what the important circumstances for producing Pavlovian Conditioning are, what is learned during conditioning and how conditioning may influence our behaviour. Therefore, this critical review would summarize some of the main claims he has made in the article and provide evidence for and against his claims.

Firstly, Rescorla (1988) proposed that in order to produce appropriate circumstances for Pavlovian Conditioning to occur, the contiguity of two events (occurring together), in this case the conditioned stimulus (CS) and the unconditioned, biologically significant stimulus (US), is neither necessary nor sufficient for conditioning to occur and for forming an association between CS and US. The failure to arrange contiguity would also not preclude associative learning (Rescorla, 1988). Rather, it should be the information one stimulus (the CS) gives about another (the US), known as the learning of relations or contingency of events, that should be important. The contingency of events (CS and US) can be calculated by the probability of US occurring in the presence of CS minus the probability of US occurring in the absence of CS. It can also be expressed as P(US|CS) – P(US|~CS).

Rescorla (1988) quoted experiments showing that amount of conditioning may be sensitive to the base rate occurrence of US against a CS/US contiguity taking place – P(US|~CS), in which he concluded that contiguity is not a sufficient circumstance for producing conditioning. From Rescorla (1968), asymptotic levels of fear conditioning, measured by the ability of the CS to interfere with the organisms’ ongoing behaviour, can be plotted against P(US|CS) and P(US|~CS). Results revealed that conditioning increased with P(US|CS). However, conditioning was an inverse function of P(US|~CS) while keeping CS/US contiguity constant. By simply increasing the base rate of the US shock, conditioning attenuated from excellent to negligible. Therefore, Rescorla (1988) concluded that conditioning depends not on contiguity between CS and the US, but rather the information CS provides about the US as this captures the relation needed to produce an association between two events.

Moreover, the idea of contingency being a necessary and sufficient circumstance for conditioning by Rescorla (1988) was directly contradicted by results of subsequent experiments (Papini and Bitterman, 1990). In one experiment by Brandon (1981), a single group of pigeons was trained with three colours following each other in a haphazard (random) order. In the presence of colour A, free food was on average given twice per minute. In colour B, once per minute; finally, in colour C, no food was given. Though in all conditions, the probability of reinforcement was exactly the same in its presence as in its absence (i.e. zero contingency), pigeons responded differentially to colour B which was less than to A and more than to C. Therefore, conditioning can be elicited with the absence of contingency. Similar results have been obtained using goldfish, with both food and shock as reinforcers (Brandon, Stake and Bitterman, 1982). Therefore, it is questionable whether contingency is really a necessary circumstance to produce learning.

In Rescorla (1988), he mentioned experiments showing that contiguity is not necessary for Pavlovian associations. Consider an experiment by Rescorla (1968) where instead of omitting all shocks in absence of the tone, all shocks were omitted in the presence of the tone, which ensured that all CS/US contiguities were taken away while a high base rate of US occurrence is maintained – a high P(US|~CS). Results showed that organisms still managed to learn that the tone and the US were negatively related, where the tone became a conditioned inhibitor. In addition, Rescorla (1988) also found out that part-whole relation may play an elicitive role in Pavlovian conditioning, which refers to the phenomenon that partial information about an object may serve a signal of the entire object, which impacts the formation of an association between stimuli. Whether part-whole relation really plays an elicitive role in Pavlovian conditioning yields reliable and valid results still demands further investigation.

In strong contrast to Rescorla’s (1988) propositions, a study by Bangasser et al. (2006) suggested that stimulus contiguity is in fact necessary for conditioning to occur. They used a trace conditioning paradigm, where presentations of the CS and the US were separated in time by an interstimulus interval. In their study, even if intact animals (i.e. rats being studied without hippocampal lesions), they could still associate discontiguous stimuli – stimuli that were not paired together, contiguity was still necessary for trace fear conditioning, where the hippocampus has evolved the special role of compensating for discontiguity. Rats used in Bangasser et al. (2006) with hippocampal lesions were able to learn the predictive relationship between stimuli, but only after contiguity was restored. In particular, they designed a ‘contiguous trace conditioning’ paradigm where CS-US contiguity was restored by representing the CS with the US simultaneously. Though rats with excititoxic (involving an agent binding to a nerve cell receptor to either stimulate or damage it) lesions of hippocampus could not learn a standard trace fear-conditioning paradigm, lesioned rats trained on CTC had showed significant conditioning. Here, hippocampus seemed to have played a role in compensating discontiguity. Results were in contrast to the view that predictive relationship per se (i.e. the informational, contingency view) leads to association formation.

Moreover, the proposition that contingency evaluation may have played a key role in conditioning does not rule out the role of contiguity (Arvanitogiannis, 1997). If animals are to calculate contingency of events, which is to compute the frequency of reinforcement in the presence and the absence of a CS in order to develop a conditioned response, it seems difficult for the animal to carry out the computation unless it has first established associations upon which to base its determination of contingency, where contiguity may have played a role. One alternative theory of circumstances sufficient for conditioning was suggested by Staddon and Zhang (1991) that both pairing and contingency play a role in conditioning, which seems to have captured nicely the sophistication underlying contemporary theories of conditioning. Another idea was prompted by Gibbon et al. (1977), whom produced evidence demonstrating that conditioning depended on the ratio of the interstimulus interval (ISI) to the intertribal interval (ITI). The idea for Gibbon et al. (1977) should have been considered in Rescorla (1988) as a possible circumstance for producing conditioning, which may give a more comprehensive account for circumstances producing conditioning.

Rescorla (1988) once expressed disagreement over the commonly held belief about Pavlovian Conditioning in that it is a slow process where organisms would learn only if stimulus relations are laboriously repeated. He then suggested that modern data did not support the belief and went on saying that one-trial learning is not confined to flavor-aversion learning and learning in five or six trials is common. Unfortunately, Rescorla (1988) had not included studies that supported his counter arguments, therefore whether Pavlovian Conditioning is a slow process remains questionable. One good example may be the aplysia californica, which could demonstrate siphon and gill withdrawal quite rapidly (Hawkins et al., 1983). Perhaps, the speed where organisms can be conditioned may depend on factors like the preexperimental relation between the CS and US, circumstances of stimulus selection and CS-US contingency (Spear and Rudy, 1990).

Concerning the content learned by organisms during Pavlovian Conditioning, in opposition to traditional claims, Rescorla (1988) suggested that organisms will be able to learn an array of associations, not just the relation between CS and US. This idea was supported by subsequent research (Blaisdell et al. 1998, Denniston et al. 1998, Savastano et al. 1998), where subjects not only encoded CS-US associations, but also precise information about how CS and the US are temporally related, and that CRs could be timed just at the moment when the US is about to be presented (Kehoe et al., 1989).

Furthermore, Rescorla (1988) argued that modern thinking envisages that there is a hierarchical organization where single pairs of elements may not all be treated at the same level of analysis. Associations among some pairs of items may yield new entities that themselves would enter into further associations (Rescorla, 1988). He mentioned a study done in his laboratory which supported the hierarchical organizational view – a study of second-order autoshaping in birds, where there was unequal associability of particular CS-US combinations (Timberlake, 2004).

Before commenting on this capability in organisms of distinguishing between associations of different events, where a hierarchical organisation is being involved, this area seems to deserve more research interest as there has been relatively less research being done to examine the validity of this view in Pavlovian Conditioning, for instance whether humans are capable of showing an effect of hierarchical organisation during conditioning and whether animals in general are capable of distinguishing between parallel associations and pairwise associations, too. Nevertheless, this seems to support the view by Rescorla (1988) that relation between a neural event (CS) and a valuable event (US) is not the only thing learned. This idea prompted a later research in an instrumental learning paradigm (Colwill and Rescorla, 1990).

To sum up, in light of research evidence, whether contiguity is neither necessary nor sufficient remains highly questionable. Perhaps, it may depend on how one defines contiguity, say whether it is the number of CS-US pairings, or how closely CS and US are related in time – a temporal perspective. It also needs further investigation in terms of how Rescorla’s (1988) claims can stand in phenomenon like overshadowing and potentiation and in types of conditioning like delayed and trace conditioning (Bitterman, 2006). The modern view that there is a hierarchical organization where associations among some pairs of items yield new entities that themselves can enter into further associations, instead of single pairs of elements all treated at the same level of analysis, would deserve further research interest. Pavlovian conditioning remains a sample learning process that demands careful detailed analysis, and would act as a model that would study modification by experience and ultimately characterize the nature of learning. Furthermore, more work can be done on how body’s reactions to drugs and some diseases may involve Pavlovian Conditioning mechanisms, for instance drug tolerance (Siegel, 1983), stress-induced analgesia and immunosuppression (Ader and Cohen, 1981) and other perspective practical applications.

Arvanitogiannis, A. (1997). The missing link between neurobiology and behavior in Aplysia

Colwill, R. M. and Rescorla R. A. (1990). Evidence for the hierarchical structure of instrumental

Rescorla, R. A. (1968). Probability of shock in the presence and absence of CS in fear conditioning.

Journal of Comparative and PhysiologicalPsychology, 66(1), 1-5.
Rescorla R. A. (1988). Pavlovian Conditioning. It’s Not What You Think It Is.
American

Timberlake, W. (2004). Trends in the Study of Pavlovian Conditioning. International Journal of