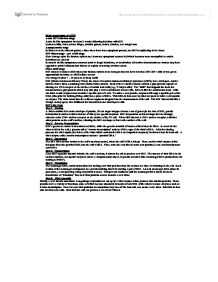 Basic progression of AIDS Acute HIV infection stage Acute flu-like symptoms for about 2 weeks following infection with HIV Includes chills, fever, severe fatigue, swollen glands, rashes, diarrhea, and weight loss. Asymptomatic stage Referred to as the window period, a time when there is no symptoms present, but HIV is replicating in the blood. HIV illness stage - pre AIDS stage More damage upon the immune system and increased symptoms because individual becomes more susceptible to certain infections and cancers Recurrent flu-like symptoms, recurrent yeast or fungal infections, or reactivation of inactive tuberculosis and women may have aggressive pelvic inflammatory disease or rapidly advancing cervical cancer. Final AIDS stage HIV disease becomes AIDS when your immune system is so damaged that you have less than 200 CD4+ cells or you get an opportunistic infection or AIDS-related cancer On average it takes 7 - 10 years to develop AIDS ...read more.

The virus enters into the cells and begins to integrate into the chromosomes of the cell. The HIV virus works like a foreign enemy agent, who infiltrates the bloodstream and sneaks past cells. HIV Life Cycle Step 1: Binding A virus consists of an outer envelope of protein, fat and sugar wrapped around a set of genes (in the case of HIV, genetic information is carried as RNA instead of DNA) and special enzymes. HIV has proteins on its envelope that are strongly attracted to the CD4+ surface receptor on the outside of the T4-cell. When HIV binds to a CD4+ surface receptor, activates other proteins on the cell's surface, allowing the HIV envelope to fuse to the outside of the cell. Step 2: Reverse Transcription HIV's genes are carried in two strands of RNA, while the genetic material of human cells is found in DNA. ...read more.

Step 5: Translation The messenger RNA carries instructions for making new viral proteins from the nucleus to a kind of workshop in the cell. Each section of the messenger corresponds to a protein building block for making a part of HIV. As each messenger RNA strand is processed, a corresponding string of proteins is made. This process continues until the messenger RNA strand has been transformed or "translated" into new viral proteins needed to make a new virus. Step 6: Viral Assembly Finally, a new virus is assembled. Long strings of proteins are cut up by a viral enzyme called protease into smaller proteins. These proteins serve a variety of functions, some of which become structural elements of new HIV, while others become enzymes, such as reverse transcriptase. Once the new viral particles are assembles, they bud off the host cell, and create a new virus. this virus is then able to infect new cells. Each infected cell can produce a lot of new viruses. ...read more.