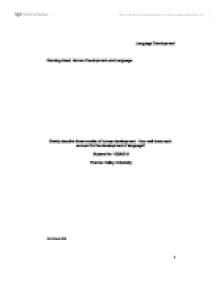 Briefly describe three models of human development. How well does each account for the development of language?

Thus, the nativists claim that language acquisition is innately determined and that we are born with this built-in device, which predisposes us to acquire language. This mechanism predisposes us to a systematic perception of language around us. Eric Lenneberg (1967 cited in Hayes 2000), in his attempt to explain language development in the child, assumed that language is a species - specific behaviour and it is 'biologically determined'. Nativists do not see imitation as important as this does not explain a child saying "I brushed my tooths" as this does not appear in older companions language. Nativists also point out that parents do not sit down with their children and teach them grammar (Slobin 1975) found that parents pay little attention to the grammatical correctness of their children's language. Empiricists' account of language development and acquisition can be explained using principles as operant conditioning, classical conditioning and observational learning. Skinner argued that children learn language as parents selectively reward or punish only those behaviours which they recognise as appropriate, grammatically correct utterances. Basically saying that language learning occurred through a stimulus * response * feedback process. This model of learning supposed that imitation was a necessary precondition for language learning. Learners would receive language input through listening as stimulus, and learn through imitation of this input. Imitation, together with the effects of corrective feedback acting as reinforcement, would lead to the successful internalisation of new language items which would be added to the learner's grammar. ...read more.