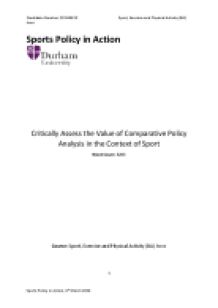 Transfer-Encoding: chunked ﻿Candidate Number: Z0 948612 Sport, Exercise and Physical Activity (BA) hons Sports Policy in Action C:\Users\Joshua\Pictures\Durham-University-logo-transparent.png Critically Assess the Value of Comparative Policy Analysis in the Context of Sport Word Count: 3283 Course: Sport, Exercise and Physical Activity (BA) hons Candidate Number: Z0 948612 SUMMATIVE ASSESSMENT FEEDBACK SHEET ? SASS Module Title: Date: Assignment Title: Word Count: ASSESSMENT CRITERIA Classification Fail (below 40%) 1st 2:1 2:2 3rd 85+ 70 - 84 60 - 69 50-59 40-49 35 - 39 30 - 34 29 or below Organisation of Assignment (i.e. content and structure) Including relevance to question, structure of the assignment, keeping to word limit, quality of writing and grammar. Use of Sources (i.e. presentation and style) Including demonstrable use of sources included in the course syllabus, demonstrable use of evidence from other original sources i.e. beyond textbooks, lecture notes and/or commentaries, critical use of sources. Argument and Analysis Including providing definition and discussion of key concepts or theories, originality and depth of analysis, balance between generalisations and empirical evidence (if appropriate) & conciseness, avoidance of over-statement. Feedback: Strengths of Assignment: Weaknesses of Assignment: Suggestions for Improvement: All marks in the current year are provisional until they have been confirmed by the appropriate Examination Board. First Marker?s Signature: Moderator?s Signature: (if applicable) Mark The Provisional Mark for this piece of work is: ________________ With the use of academic literature and theoretical framework, the following essay will undertake a comparative analysis of the sporting policies which operate in Finland, Australia and the United Kingdom. In doing so, a contrast will be drawn between certain aspects of sports culture, provision and organisational structure (Houlihan, 1997). Furthermore, due to the nature of the policies which reside in the selected countries, a wider comparison between countries which prioritises elite level sport and a country which prioritises mass participation will occur. The overarching purpose of this text is to critically determine the value of comparative policy analysis within the context of sport. ...read more.

The doping scandal of 2001, appeared to further reinforce the path of providing extensive sporting opportunities opposed to elite sports performance in Finland (Collins and Green, 2008). The Finnish Sports Federation released the following statement; ?No one dares talk about more investment in elite sport, it`s not really a good thing today to talk about elite sport because there are too many problems with doping and cheating?? (Interview: 9th March, 2006). Pierson (2000) suggests that this statement highlights governmental use of conforming information to support a particular pathway, which is important as it can be considered a crucial part of the legitimisation process. As policy-makers strengthen arguments to support their predisposed pathways, the process of inventing, developing and fine-tuning a course of action to achieve more relevant body of policy becomes less likely (Dryzek, 1983). Whilst the multi-dimensional focus adopted in the UK provides relative focus to ?active citizenship?, when investigated, NGBs identified that elite focused policy initiatives take priority (Green and Houlihan, 2004). Furthermore, it is suggested elite prioritisation will continue to take priority, as a result of shared values and beliefs within the system (Green, 2003). Growing levels of overweight and obese young people are considered as one of the most serious ?public health challenges of the new century? (DoH, 2002: 3). Considering the associated health risks of the ?obesity crisis?, it seems unjustified to continue to prioritise elite sport whilst such risks are apparent. However, Esping-Anderson (1990) suggests that the socio-economic and cultural foundations of a country will shape a country regardless of alternative challenges. Due to elite focused mentalities which reside in Australia and the UK, it could prove difficult to promote health focused initiatives (Hoye & Nicholson, 2009). Green and Collins (2008) propose elite prioritisation would seem more rationale if done through a strong commitment to mass participation, however as the return on this method is uncertain it is unlikely to be considered. ...read more.

Furthermore, comparative policy analysis can lead to the development of completely new insights. These can be considered important to the overall development of international policy (De Knop et al., 1996). In a conclusive statement, the value of comparative policy analysis can be seen in its ability to draw cross-national perspectives which are capable of developing universal concept which can be beneficial to human societies (Gibbs, Kraemer, and Dedrick, 2003). This essay has shown different comparative analyses of Finland, Australia and the UK in relation to different sports culture, provision and organisational structure. It has demonstrated Australia?s commitment to elite sport policy, whilst Finland opted for policy relating to mass participation. The UK has attempted a twin approach, with data showing that it leans towards elite sports policy. It could be suggested Australia and the UK opt for political capital over health. This has shown through the rising levels of obesity and inactivity. It was also noted how there was recognition of change needed but implementation of these changes would come at political cost. However, research from Finland showed although the focus was on mass participation, elite performance may have been important too as the ?doping scandal? of 2001 proved. Australia and the UK have shown to focus on success and national pride whereas Finland opted for health. The biggest comparative showed in funding, whilst Finland majorly self-funds participation rates, Australia dedicates just 5% of the sports budget towards mass participation policies. This is hugely reflective in obesity and inactivity levels. Whilst this essay also recognised the limitations of the stages model, it could be argued until a more thorough model is designed, this is most appropriate. In conclusion, a thorough model needs to be adapted to be more inclusive of factors which may affect policy-making. In reflection of the policies using the current stages model, policy approaches could adapt a hybrid design, incorporating both approaches, such as the UK, in both participation and elite success. ...read more.