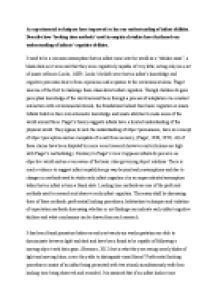 ﻿As experimental techniques have improved so has our understanding of infant abilities. Describe how ?looking time methods? used in empirical studies have furthered our understanding of infants? cognitive abilities. It used to be a common assumption that an infant came into the world as a ?tabulae rasae?, a blank slate as it were and that they were cognitively capable of very little, acting only on a set of innate reflexes (Locke, 1689). Locke?s beliefs were that an infant?s knowledge and cognitive processes derive from experience and exposure to the environment alone. Piaget was one of the first to challenge these ideas about infant cognition. Though children do gain perceptual knowledge of the world around them through a process of adaptation via constant interaction with environmental stimuli, the foundations behind their basic cognition is innate. Infants build on their own schematic knowledge and innate abilities to make sense of the world around them. Piaget?s theory suggests infants have a limited understanding of the physical world. They appear to lack the understanding of object permanence, have no concept of object perception and are incapable of recall from memory, (Piaget, 1938, 1959). All of these claims have been disputed by more recent research however and criticisms are high with Piaget?s methodology. Contrary to Piaget?s view it appears infants do perceive an objective world and are even aware of the basic rules governing object relations. ...read more.

A more recent study failed to replicate these findings however showing infants of twenty-four months old showed no significant preference for schematic faces, (Koopman and Ames, 1968). This may be due to the fact the ability to distinguish between faces declines as an infant matures. Infant attachment studies indicate a strong visual preference to the mothers face when compared to that of strangers, suggesting that this innate capability for facial recognition is vital to serve evolutionary purposes inbuilt for survival, (Bushell, 1989). More research has been done in this area suggesting that there is indeed an innate perceptual process for face recognition, and a specialized area of the brain has been found to be active during these cognitive process giving biological evidence to back Fantz?s (1961) previous findings, (Pascalis, 2002, Kelly et al, 2007). Habituation techniques are also used to observe infant cognition. An infant is presented with a stimulus, their looking time is recorded then the same stimulus is presented again. It is expected there should be a decrease in looking time on subsequent presentations of the same stimulus, this technique is repeated until the infant habituates to the stimulus. A novel stimulus is then presented and it is observed if the infant dishabituates to the new stimulus. This method is used to establish not only whether an infant is able to discriminate between stimuli but indicates whether they have committed a stimulus to memory and also illustrates their ability to recall. ...read more.

Research into infant cognition is still very current and as technologies improve so will experimental methods. Looking time methods are often criticized as being too presumptuous as researchers are only drawing from their own speculations about the processes and abilities infants hold. More recent studies take advantage of new technologies such as fMRI to confirm or disprove findings which can give more experimental validity to a given theory on infant cognition, (Mather, Cacioppo and Kanwisher, 2013). It can be concluded however that infant capabilities go far beyond what was first assumed in the late 1950?s. Contrary to what Piaget (1959) believed, it has been found that infants can discriminate between patterns, shapes and are able to perceive an objective world. They have fine tuned capabilities some which are better than adults for example in face recognition, (Pascalis, 2002). They are able to discriminate between individuals in the first few hours of life and able to perceive which individuals are important to them, (Bushell, 1989). They also appear to have an understanding of rules and reality of the world in which they live, (Baillargeon, 1987). All these findings indicate that infants are not only able to perceive the world around them but make sense of it suggesting some basic core knowledge is innate and this in turn helps the infant to develop, learn and grow. Word count: 1720. ...read more.