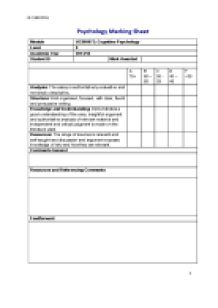 ﻿I.D 12001726 Psychology Marking Sheet Module UC809672: Cognitive Psychology Level 9 Academic Year 2014/15 Student ID Mark Awarded A 70+ B 60 ? 69 C 50 - 59 D 40 ? 49 F <39 Analysis: The essay is authoritatively evaluative and not simply descriptive. Structure: Well organised, focused, with clear, fluent and persuasive writing Knowledge and Understanding: Demonstrates a good understanding of the area, insightful argument and authoritative analysis of relevant material and independent and critical judgment is made on the literature used. Resources: The range of sources is relevant and self-sought and discussion and argument exposes knowledge of why and how they are relevant. Comments General Resources and Referencing Comments Feedforward Tick if passed to second marker Yes Over the decades, empirical studies on Working Memory have revolutionised the way that we think about the human mind, by providing us with a greater understanding of the cognitive processes involved in executive functions such as attention, problem solving, reasoning and decision making. Nevertheless, despite this significant progress, certain questions still remain unanswered as to how specific cognitive mechanisms are organized. Perhaps one of the most prominent models to have emerged from the study of executive functions and cognitive control in working memory is that which was proposed by Baddeley and Hitch (1974). They described a three component model of working memory in which executive functions operate under a unitary core structure called the Central Executive (CE). However, whilst the central executive is considered to be the most important component of working memory, due to the significant role ...read more.

extended further support to the idea of fractionating the central executive into individual subcomponents, by identifying four separate functions of the central executive; selective attention; divided attention (timesharing) in dual tasks; switching of attention and activation of long term memories. According to Baddeley, each of these executive functions plays an important role in guiding our cognitive processes and activities (Eysenck & Keane, 2010, p. 218), and evidence to support the distinction between separate functions can be seen in a variety of experimental studies involving random generation and dual coordination tasks (Baddeley, 1996a; Baddeley, Della, Papagno & Spinnler, 1997; Baddeley, Emslie, Kolodny & Duncan 1998). In particular, comparative studies between patients with Alzheimer?s and healthy adults, have accrued strong evidence for a separate function of divided attention, with numerous studies showing that Alzheimer?s patients have greater difficulty conducting two tasks simultaneously (such as keeping track of several conversations at the same time or dual tasking with visuospatial tracking and digit sequence recall) than when presented with the same tasks separately. Coinciding with these findings, a study of individual differences was conducted by Miyake et al., (2000) which employed a latent variable analysis in an attempt to identify common underlying factors in executive processes. By administering a variety of tests including the Wisconsin Card Sorting test (WCST), Tower of Hanoi (TOH), Random Number Generation (RNG), and dual-tasking (e.g., operation span), they were also able to identify three moderately related but dissociable executive functions, called inhibition, shifting and updating. ...read more.

Firstly, to augment the use of data produced, they acknowledge that previous studies have shown that the anterior temporal lobes (Eslinger, Moore, Anderson, & Grossman, 2011; Pennington, Hodges, & Hornberger, 2011), superior parietal lobule and intraparietal sulcus (Collette, et al., 2005; Koenigs, et al., 2011) have all been linked to similar executive processes, and as such, it may be beneficial to replicate their study, by focusing on patients with lesions outwith the frontal lobes, to obtain a more comprehensive view on the diversity of brain regions involved. Secondly, increasing the sample size would enable further assessment of individual differences so that other factors such as gender could be considered. To conclude, whilst the concept of a unitary central executive has been hindered by recent advancements in neuroscience, much of the research put forth still provides an abundance of evidence which attributes the frontal lobes as playing a critical role in executive processes. However, there still remains much controversy as to the extent in which they dominate other anatomical regions of the brain in carrying out executive functions. Moreover, there is consistent evidence to suggest that there are distinct sub-components which are responsible for executive processes such as inhibition, selective attention, dual task co-ordination and updating of long term memory representations. That said, perhaps the most recent advancements in neuroscience yield the biggest breakthrough in understanding the complexities and mechanisms involved in executive functioning, and as such, whilst a unitary concept of the central executive is useful as an umbrella term to describe executive processes, the evidence would suggest that such processes are undeniably facilitated by the reciprocity and interactivity of complex neural networks and various brain structures. ...read more.