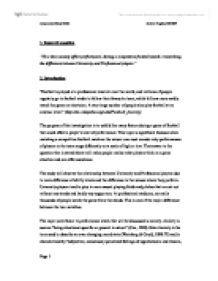 &quot;How does anxiety affect performance, during a competitive football match; researching the difference between University and Professional players.&quot;

1. Research question "How does anxiety affect performance, during a competitive football match; researching the difference between University and Professional players." 2. Introduction "Football is played at a professional level all over the world, and millions of people regularly go to football stadia to follow their favourite team, whilst billions more avidly watch the game on television. A very large number of people also play football at an amateur level." (http://en.wikipedia.org/wiki/Football_(soccer)) The purpose of this investigation is to unfold the many factors during a game of football that could affect a player's level of performance. This topic is significant because when watching a competitive football match as the viewer one must wonder why performances of players in the team range differently on a scale of high or low. The answer to the question that is stated above will make people realise what players think in a game situation and can offer assistance. The study will observe the relationship between University and Professional players due to main difference of ability levels and the difference in the venues where they perform. University players tend to play in more casual playing fields and pitches that are set out without any stands and hardly any supporters. At professional stadiums, normally thousands of people watch the game from the stands. This is one of the major difference between the two variables. The major contributor to performance levels that will be discussed is anxiety. Anxiety is seen as "being situational-specific or general in nature" (Cox, 1998). State Anxiety is the term used to describe an ever-changing mood state (Weinberg & Gould, 1999:73) and is characterised by "subjective, consciously perceived feelings of apprehension and tension, associated with activation of the automatic nervous system" (Weinberg & Gould, 1999:73). For example, a football player would experience state anxiety just before taking a penalty in the World Cup Final. Trait Anxiety on the other hand, is determined by the individual's personality. ...read more.

to 4 ("Very much so"), expressing the intensity of which each symptom is experienced. Possible scores for each of the subscales therefore range from 9 to 36. A second part of the scale, modified by Jones & Swain (1992), measures the 'direction' of anxiety across the three subscales. In this the subject rates the extent to which the experience intensity of each symptom is felt to be facilitative or debilitative to the upcoming performance. This is rated on a scale from -3 ("Very debilitative") to +3 ("Very facilitative"), so possible direction scores for each of the three subscales range from -27 to +27.Prior to all of the questionnaires given out the participants of the study will be given an information sheet stressing the purpose of the study and the clear guidelines of what is going to be asked of them. Through the information sheet the players will be advised that any of the information that is collected will be treated with the strictest of confidence. A consent form will also be distributed to the players, so that they can provide their age and brief contact details. The participants of the study will be University and Professional league players. The university players will be participants from the fourth team. The Professional team that will be used to conduct the study is Torquay United. One limitation that would have to be considered when going through with the research is whether the players will have enough time to complete the CSAI-2 effectively. Contact will have to be made to speak to the professional club and arrange times of when the study can be conducted. Once all of the analysis is collected in the data would be separated into the university and professional. The comprised data will be put into a table and arranged in the way of marks. Once the correlated data is finalised, it can then put it in a form of a table and graphs to make it more visually pleasing and easier to understand for the viewers. ...read more.

At professional stadiums, normally thousands of people watch the game from the stands. This could cause the Professional players to worry more about the crowd watching their performance and scrutinising them to play well. Resulting in high levels of cognitive anxiety. The findings from the research show little significant difference in intensity of cognitive anxiety, somatic anxiety and self-confidence from Professional players to levels in University players. Direction level finds for cognitive anxiety, somatic anxiety and self-confidence have shown a difference between these different players. The professional players feeling more neutral about there views of the 27 questions, instead of the deilative level of anxiety from the University findings. This could be due to the experience levels of the professional players and the coaching that they receive on a day-to-day basis. Future recommendations for the study will now be explained; this is to tell the reader ways in which the study could be improved or changed for it to be more effective. Firstly, only one test was carried out, this is due to the time duration that was available to conduct the study. It would have been interesting to see the difference in views of the players when having to do the CSAI-2 questionnaire on two more occasions before the up coming match. This could also be used to gain more detailed findings of anxiety. An example of this would be to give the participants the questionnaire 3 days before the match, then 1 day before, then finally 1 hour before. Due to the questionnaire only being given out once in the current study the players might not of taken it seriously and answers might not be true. Finally, it would be recommended that more research and study go into the reliability of the CSAI-2 questionnaire. Although it is widely accepted as a variable means of finding competitive state anxiety levels (Martens et al, 1990; Wiggins, 1998), a few recent studies have indicated that the results should be used with caution. ...read more.