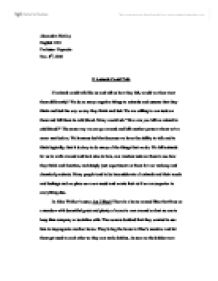 If Animals Could Talk

Alexandra McCoy English 1201 Professor Papaccio Nov. 8th, 2005 If Animals Could Talk If animals could talk like us and tell us how they felt, would we then treat them differently? We do so many negative things to animals and assume that they think and feel the way we say they think and feel. We are willing to run tests on them and kill them in cold blood. Many would ask "How can you kill an animal in cold blood?" The same way we can go around and kill another person whom we've never met before. We humans feel that because we have the ability to talk and to think logically, that it is okay to do many of the things that we do. ...read more.

Blue was used to the other horse and happy when she was around, but the owners just took her away from him when they were finished having the babies. Blue changed from this sad horse to a horse with "A look of independence, of self-possession, of inalienable horseness". (632) Blue was happy that he had someone who he could relate with, meaning another horse who he could communicate and would do the same things that he did. But soon after the female horse was impregnated she was taken away from Blue and back home. Blue became more like a wild horse then the friendly one that he used to be. He lost all trust for people and put a barrier between humans and him. In our society, the pace is so fast that everyone is trying to move forward and get ahead of one another that we tend to forget about the small things. ...read more.

We should be more considerate of other beings. Sometimes people express how bad they feel when they see animals being beaten or suffering from the negative results for a chemical test. No progress comes from expressing our feelings about negative treatment, we have to be willing to act upon it and start with small things like not using animals for research for our own purposes. Mark Prigg noted that "MORE than 500 leading scientists and doctors have pledged their support for animal testing in medical research." Scientist as well as doctors is trying to argue that it is alright to test animals because we need to make sure the products will not harm humans after being put on the market. If we are the ones who need to products we should be the ones that get the tests ran on us, not the animals. ...read more.