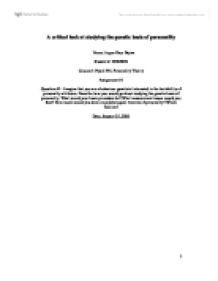 Imagine that you are a behaviour geneticist interested in the heritability of personality attributes. Describe how you would go about studying the genetic basis of personality

A critical look at studying the genetic basis of personality Name: Arpun Kaur Bajwa Student #: 20096989 Course #: Psych 356, Personality Theory Assignment #1 Question #5 - Imagine that you are a behaviour geneticist interested in the heritability of personality attributes. Describe how you would go about studying the genetic basis of personality. What would your basic procedure be? What measurement issues would you face? How much would you draw on psychological theories of personality? Which theories? Date: January 25, 2006 Personality Theory - 1st Assignment - Question #5 Behavior geneticists assess the question of inheriting personality. Are our genes responsible for our creativity, aggressiveness or confidence? Examining personality traits through a genetic focus is an obscure task. Methods employed by behavior geneticists involve epidemiological studies, such as screening family pedigrees, conducting twin heritability studies, and adoption studies. In this essay, I will discuss the methodology behind twin studies as well as many issues that behavior geneticists face. I will also present information regarding other personality theories and their relationship to behavior genetics. I believe that behavior genetics plays a very important role in understanding personality traits and should be kept in the forefront of psychology as a prominent research theory. Most psychological personality theories investigate only one aspect of behavior. Whether it is a psychoanalytical approach or phenomenological approach, most theories concentrate on one field of personality psychology. This phenomenon also holds true for the biological approach. Behavioral genetics, essentially, attempts at understanding behavior (personality traits) ...read more.

Dizygous twins, for example, would represent a good control group (Phillips, 2000). A control group is used in experiments to provide a reference for the group one is actually studying. Meaning, if I expect to see aggressiveness highly correlated in monozygous twins, I would expect the correlation to be very low in dizygous twins. Setting up the experiment The first step in setting up such an experiment would be to obtain the proper psychological test. In this case, a test represents an assessment tool that allows one to determine if a particular individual has a specific personality trait. The test must possess four characteristics: Validity, reliability, fairness and must be normed to a standardization group (Lerner and Kline, 2006). The next step is to recruit twins that are both identical and fraternal. The number of twins should only be limited by how many are available. An attempt should be made to increase the sample size of the study, this is known as the n value. The higher the n value in any particular study signifies results that are more statistically reliable. The third step is to administer the tests on all participants. Correlation factors Behavior genetics relies strongly on correlation coefficients, as opposed to physical findings such as plaque build up in the brains of Alzheimer's patients. Each twin pair is compared in a quantitative manner. Correlation coefficients are represented by the symbol r and range from -1 to +1. A relationship between a pair of results that has an r-value of +1 represents a positive relationship, zero represents no relationship and -1 means a negative relationship (Funder, 2004). ...read more.

Do behavior geneticists truly ignore psychoanalytical approaches? I do not believe so. Geneticists, in determining most personality trait causes, only develop associations between genes and a particular trait. Psychoanalysis actually tries to understand the thought process behind why such a personality exists. In the case of remediation, the psychoanalytical approach proves to be helpful (for personality disorders). Behavioural genetics does not provide any remediation for those with a personality disorder, where only correlation studies exist. Essentially, both personality theories are integrated and must be applied appropriately to individual cases. Measurement issues with behavioral genetics have been discussed throughout this essay. Regarding twin studies, it should be noted that despite their use as a powerful genetics tool, large sample sizes are not always possible and therefore other methods such as family pedigree studies or adoption studies can be used. Behavior genetics also runs into many ethical issues. Human breeding is not an acceptable method of research and this proves to be a challenge when assessing personality traits, as genetic mapping is nearly impossible. Concluding remarks Behavioral genetics provides a very technical look at personality traits. Genetics is the basis of all biological systems and within the genetic code is the understanding of personalities. This theory, however, does not provide the whole picture and must be used in conjunction with other personality theories, to truly understand and begin studying personality types. Behavioral genetics is a difficult theory to apply due to its experimental invasiveness and hence statistical reports such as twin studies, adoption studies and family studies are used in assessment of heritability. I believe behavioral genetics will continue to grow in the coming years and advance the world of personality psychology. ...read more.