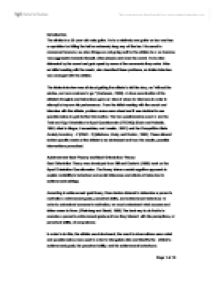 InterventionSelf confidence is important as this makes the golfer feel good about himself. If self confidence is low, doubts set in and he perceives himself as unable to perform successfully

Introduction The athlete is a 30-year-old male golfer. He is a relatively new golfer on tour and has a reputation for hitting the ball an extremely long way off the tee. His coach is concerned however, as when things are not going well for the athlete he can become very aggressive towards himself, other players and even the crowd. He is often distracted by the crowd and gets upset by some of the comments they make. After an initial meeting with the coach, who described these problems, an intake interview was arranged with the athlete. The intake interview was all about getting the athlete to tell his story, as "without the stories, we have nowhere to go." (Andersen, 2000). A close examination of the athlete's thoughts and behaviours gave an idea of where to intervene in order to attempt to improve his performance. From the initial meeting with the coach and interview with the athlete, problem areas were raised and it was decided to use questionnaires to gain further information. The two questionnaires used were the Task and Ego Orientation in Sport Questionnaire (TEOSQ) (Duda and Nicholls, 1992, cited in Singer, Hausenblas, and Janelle, 2001) and the Competitive State Anxiety Inventory - 2 (CSAI - 2) (Martens, Vealy, and Burton, 1990). These allowed further specific needs of the athlete to be addressed and from the results, possible interventions prescribed. Achievement Goal Theory and Goal Orientation Theory Goal Orientation Theory was developed from Gill and Deeter's (1988) work on the Sport Orientation Questionnaire. The theory takes a social cognitive approach to explain variability in behaviour and social influences and effects of behaviour in achievement settings. According to achievement goal theory, three factors interact to determine a person's motivation: achievement goals, perceived ability, and achievement behaviour. In order to understand someone's motivation, we must understand what success and failure mean to them. (Weinberg and Gould, 1999) ...read more.

Thus anxiety has a thought component (e.g. worry and apprehension) called cognitive anxiety. It also has a somatic component, which is the degree of physical activation perceived." (Weinberg and Gould, 1999, pp72) The CSAI-2 was developed as a sport-specific inventory to measure the cognitive and somatic components of A-state (momentary anxiety states). (Martens et al, 1990). This development followed a systematic psychometric process. Evidence supporting the construct validity of the CSAI-2 is provided through a systematic progression of research studies reviewed by Martens et al, (1990). The usefulness of the inventory as a diagnostic instrument for clinical purposes has not yet been established. It was important that prior to the athlete completing the CSAI-2, all instructions were completely understood and in particular that his responses were based on how he felt at that moment. Ideally the test should be conducted as close as possible before competition and within an hour prior to it. (Martens et al, 1990.) The test was administered thirty minutes prior to the golfer competing in an important game. The CSAI-2 is scored by computing a separate total for each of the three sub-scales, with scores ranging from a low of 9 to a high of 36. The higher the score, the greater the cognitive or somatic A-state or the greater the state of self-confidence. The scores that the golfer achieved on this test were: Cognitive A-state, 32; Somatic A-state, 23; State self-confidence, 16. These results indicate a very high cognitive A-state and a moderate somatic A-state by the athlete. Significant was the very low score on state self-confidence. It is important to note that the CSAI-2 measures intensity of state anxiety and says nothing about the individual's perception of whether his response, be it high or low, would hinder or facilitate performance. The athlete's perception of whether his 'felt' response, relative to a specific item on the CSAI-2, was good or bad for future performance has been labelled direction of state anxiety. ...read more.

The coach outlined that the golfer has a reputation for hitting the ball far from the tee which suggests a good technique is definitely there. One approach would be for the golfer to start with his tee shot, with an initial target of 250 yards, although this should be altered so that the golfer has the experience and so is able to use imagery on tee shots of varying distances. During the practice condition, which should last for approximately 30 balls, the golfer should be constantly thinking and adjusting his stroke, with assistance from his coach, until the right distance is met on a regular basis. The purpose of setting a specific distance is so that the golfer is not just hitting the ball as far as he can, but actually putting thought into his technique and power distribution. Following on from the practice condition should be imagery which will allow the golfer to go over the technique used when playing the stroke and visualising it mentally. It is important that as much time is spent on this imagery stage as was spent on the practice condition. The final condition, control, can be met in either of two ways. Either via rest, were the golfer should make no thought about the previous task, or by practicing a totally unrelated skill, putting for example. An essential part of Cognitive Specific (CS) imagery for the golfer will be taking the skills and knowledge gained on the driving range and directly applying them to a competition scenario. For example, during the next competition the golfer may find himself in a situation where it is necessary to hit a straight drive off the tee around 240-260 yards onto the green. As soon as the golfer reaches the tee all previous thoughts and performance should be ignored and all his attention should be put onto visualising the practice sessions. This increased concentration should enable the golfer not only to perform more consistently and to his full potential, but also to not be concerned with any comments coming from the crowd because of the state of concentration. ...read more.