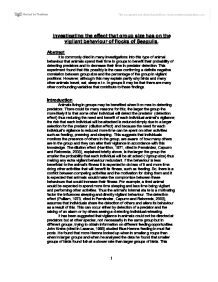 Investigating the effect that group size has on the vigilant behaviour of flocks of Seagulls.

Investigating the effect that group size has on the vigilant behaviour of flocks of Seagulls. Abstract It is commonly cited in many investigations into this type of animal behaviour that animals spend their time in groups to benefit their probability of detecting predators and to decrease their time in predator detection. This experiment found that this possibly is the case confirming a definite negative correlation between group size and the percentage of the group in vigilant positions. However, although this may explain partly why birds and many other animals travel, eat, sleep e.t.c. in groups it may be that there are many other confounding variables that contribute to these findings. Introduction Animals living in groups may be benefited when it comes to detecting predators. There could be many reasons for this, the larger the group the more likely it is that some other individual will detect the predator (detection effect) thus reducing the need and benefit of each individual animal's vigilance; the risk that each individual will be attacked is reduced simply due to a larger selection for the predator (dilution effect) and because the need for each individual's vigilance is reduced more time can be spent on other activities such as feeding, preening and sleeping. This suggests that individuals monitors the presence of others in the group, are aware of how many others are in the group and they can alter their vigilance in accordance with this knowledge. The dilution effect (Hamilton, 1971, cited in Fern�ndez, Capurro and Reboreda, 2003), explained briefly above, is the larger the group the smaller the probability that each individual will be attacked (1/group size) ...read more.

A potential problem with this data would be that there are not many, if any, actual predators around that prey on Seagulls. If this was found to be a significant problem it would suggest that the vigilant behaviour of the Seagulls may have been directed more to others in the group or to the presence of others outside the group and could be in conjunction with John Krebs' findings that they could have been more vigilant to find better feeding areas. It does seem that group size affects the vigilance of Seagulls, however, there are too many other confounding variables that could make the results found in this experiment inaccurate. Other variables not discovered or taken into account in this experiment could have influenced vigilant behaviour and therefore it could not only be group size that affects the percentage of birds being vigilant. Also it should not be assumed that the birds were being vigilant for just predators. Instead vigilance could include checking other members of the group and their activities (Caine and Marra, 1988, cited in Elgar, 1989), or individuals of other species are not predators. Further experimentation should be carried out in order to discover whether the time spent observing the activities of others is positively correlated with group size. Elgar (1989) suggests further studies into the role of the predator and that it is possible that the time the prey detects the predator is always measured by the prey's response. But not all animals give an alarm or similar warning instantly after detecting the predator. Or respond instantly to a given alarm. There is much more to be discovered in this area of animal behaviour and further investigation is needed to become certain on all influences. ...read more.