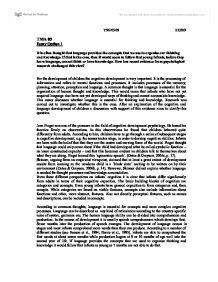 It is often thought that language provides the concepts that we use to organise our thinking and knowledge. If that is the case, then it would seem to follow that young infants, before they learn language, cannot think or have knowledge. How has recent ev

It is often thought that language provides the concepts that we use to organise our thinking and knowledge. If that is the case, then it would seem to follow that young infants, before they learn language, cannot think or have knowledge. How has recent evidence from psychological research challenged this view?

For the development of children the cognitive development is very important. It is the processing of information and refers to mental functions and processes. It includes processes of the memory, planning, attention, perception and language. A common thought is that language is essential for the organization of human thought and knowledge. This would mean that infants who have not yet acquired language also have not yet developed ways of thinking and cannot accumulate knowledge. This essay discusses whether language is essential for thinking and knowledge. Research was carried out to investigate whether this is the case. After an explanation of the cognitive and language development of children a discussion with support of this evidence aims to clarify this question.

Jean Piaget was one of the pioneers in the field of cognitive development psychology. He based his theories firmly on observations. In this observations he found that children behaved quite differently from adults. According to him, children have to go through a series of subsequent stages in cognitive development, e.g. the sensorimotor stage, in order to develop cognitive abilities. Infants are born with the belief that that they are the centre and moving force of the world. Piaget thought that language could only come about if the child had developed what he called symbolic function – an inner constructed capacity – and that this becomes evident as children talk to themselves about what they are doing. Piaget termed this ´egocentric speech´. (Oates & Grayson, 2006a, p. 17).

Skinner, arguing from an empiricist viewpoint, claimed that at least a great extent of development results from learning as the newborn child is a ´blank slate´ waiting to be written on by their environment (Oates & Grayson, 2006b, p. 14). However, Skinner did not explain whether language is needed for thought processes and knowledge accumulation.

From these different perspectives on infants´ cognition it is clear that infants differ significantly from adults in terms of their cognitive capacities. The basic building blocks of cognition are categories and concepts. Even young infants have general capacities to form categories and, then, conepts. While categories are based on visible features, concepts also include information about functions and other, more abstract, features. Also not directly perceptual features, such as names and descriptions, can be included in concepts.

According to common thoughts, language is essential for concepts and more complex cognitive processes. Language can be described as  any kind of articulation according to the country-specific rules of syntax, grammar etc. The human language ability can be divided into comprehension and production. In the course of development it is usually speech comprehension which develops first. Some months later the production of speech emerges. The development of language occurs in stages and most infants comprehend more words than they can produce. According to a number of different studies (see Fenson et al., 1994; Harris et al., 1995), infants are able to comprehend the first words at about seven months while production begins at 9 or 10 months of age well into the second year of life. If language provides the concepts that are used to organise thinking and knowledge it would follow that infants as young as 7 months are not able to do that.

A range of different methods have been used to study whether infants can think before they learn language. An effective way to study how infants thought/cognitive processes operate is called the familiarization/novelty-preference method. Infants usually prefer to look at novel stimuli.

The method is divided into two stages. In the first stage (familiarization), the infant is shown a picture or a number of different exemplars of a single category one after another, e.g. four different bunny pictures. In stage two (novelty-preference), the preference test takes place. Alongside the familiar exemplar(s) a novel exemplar of a novel category is shown. If the infant looks for longer at the novel exemplar, this is a good indicator that the infant has formed a mental representation/schema in his or her memory of the familiar category, i.e. a category representation.

However, these experiments are usually laboratory-based. It might be the case that infants process incoming sensory information different under these – controlled – circumstances and, as a result, the findings have to be treaten with caution. Nevertheless, studies using this method have been confirmed that infants aged 3-4 months are able to form categories – even in a similar way to adults.

For example, Younger and Gotlieb (1988) carried out an experiment with 108 infants aged between 3 and 7 months to investigate how categories are formed. After being familiarized with a series of six pairs of distorted dot patterns, the infants were shown a test pair that included an undistorted shape of the distorted form that they had previously seen and another form.

Most of the infants preferred the novel prototype from the novel category. This indicates that the infants had formed a category representation due to the familiarization of the set of distorted exemplars, i.e. recognized that certain dot patterns can be grouped into categories.

The study shows that the participating infants clearly were able to think and organize their thinking. All infants were aged between three and seven months. Although it is possible that the oldest infants already had developed some understanding of language, much of the infants still had no language ability. Overall, the findings of this experiment are a good indicator that infants who have not yet developed the ability to understand and produce language have good cognitive abilities.

In another experiment the same method was used by Quinn and Eimas (1998). They familiarized infants aged 3 – and 4  months with photographs of humans who were in standing, walking and running poses. In the second stage of the experiment they used pairs of photographs of a novel human and a cat as well as a novel human paired with a horse. To categorize the humans as a class, the infants would had to prefer the photographs of the cat or the horse. However, a preference for the novel category, i.e. the cats or the horses, was not observed. It might be the case that the infants in this study simply did not categorize the humans as a class. However, Quinn and Eimas found in an experiment that young infants’ representations for humans includes many other animals (at least cats, horses, and fish), whereas the category representations for non-human animals (cats, horses) exclude humans as well as other animal species (Quinn et al., 1993; Eimas and Quinn, 1994, p. 52).

These studies underline differences in the cognitive functions between infants and adults. Adult humans would never group humans and other non-human animals in one category as their schemata include much more rigid information about what constitutes a category member. The cognitive capacities of infants are not as mature as adult capacities. This lead to a different categorization of (non-)human species. As the second study shows, infants are able to think as indicated by the categorization of the different species as well as the differences between the two category representations.  However, there is no clue for the suggestion that it is only the language which made the categorization more accurate and mature. Rather than good understanding and production of language it might be experience of what the different species are.  Language is not inevitably necessary for a differentiation between them.

Nevertheless, it is suggested that there is a connection between language development and categorization. However, the direction of the connection is different. Quinn and Oates (2006a, p. 54) argue that the emergence of language, in the form of words for things, might seem to depend on infants having the sort of knowledge structure that is constructed by categories and early concepts. It is hard to see, for example, how children might be able to use a word like ´cat´ appropriately unless they have some sort of mental structure already available for organizing the objects that the word labels.

Quinn and Oates argue that some knowledge is essential for learning language. Before a young child is able to know to which animal the word ´cat´ belongs it has to have a mental representation, a category or concept, of a cat. Hence, this evidence claims that, rather that thinking is not possible without language, infants´ cognitive processes are the building block of language.

However, once a child has acquired  language, this provides them with a powerful tool for learning about new classes. Indeed, language is in itself a vast repository of classes. Nouns represent a multitude of objects and events, and verbs represent a vast number of actions. (Quinn and Oates, 2006b, p. 26).  Language may enrich a wordless cognition into broader and higher, more complex cognitive possibilities. Learning new words may also add another kind of knowledge. Some nouns, for example, represent objects or event which are not encountered in everyday life or books and the media. Without the emergence of, at least, speech comprehension some knowledge could not be accumulated.

In summary, research has clearly shown that even young infants are able to form categories and concepts. Language usually does not emerge before 7 months of age, whereas at this age infants already have some organized knowledge, e.g. to which category which animal belongs. Moreover, language development partially depends on early cognitive functions in infancy. This is exemplified  by the learning process of what a cat is like, i.e. Building a category and then a concept, and the following learning what this animal is called. However, once language is acquired, it clearly is a supportive tool for accumulating further knowledge and developing additional cognitive functions.