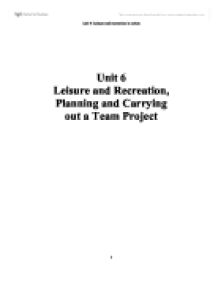 Leisure and Recreation, Planning and Carrying out a Team Project.

Unit 6 Leisure and Recreation, Planning and Carrying out a Team Project Our Brain Storm This is our brain storm of the ideas we have come up with to do our event. Disco Water Fight Mini Olympics Band Camp Trip to Alton Towers Trip to Chesington World of Adventures Initially we had to carry out a brain storm of ideas to outline all of our ideas and to pick the one that we as a group can conduct effectively. The criteria we had to keep in mind was that we had to involve the lower School children, the event had to happen in an opening of 2 hours and the event would have to be running on a Wednesday. Keeping this in mind we had to scrap the following ideas: * Trip to Alton Towers * Trip to Chesington World of Adventures As our competing group was doing a disco we had to scrap that idea. We all agreed on the mini Olympics, as it was easy and would tie in the same category as PE. We now had to agree on the sports we were going to use in this, the criteria we had was the Hartsdown Hall and only 7 courts in it. So we decided: Hockey Cricket Table Tennis Football Target Shooting Tennins Running Badminton Tug of War Swimming Basketball BaseBall We have now chosen our task completely and we are now in the process of starting our groups organisation. This is the way in which we as our group will be working, we have divided the work in four sections to compliment each other. The Human resources will be dealing with the staff required such as: * Harts down staff * Teachers * Extra helpers The finances department will be dealing with raising money and spending the money. Physical resources are the items required such as: * Hall * Sports Equiptment * Travel The legal section is generally to make sure that the venue is insured for such an event. ...read more.

We will be inviting the year seven girls and no boys, as it will be easier to handle the boys than they girls or as mixed groupings. We are going to invite 60 girls as we are hoping to now hold the event on an afternoon when the pupils have personal education this way he boys will be at school doing sports and will not be to unfair towards them also we will be inviting all the girls (60) therefore none of them are left out. Now that there is an increase in the number of pupils participating this means that our costs may increase, as we now have to get refreshments for 60 pupils instead of 36. The sports have been once again changed and each sport will have a leader as listed below: Football: Shaun Jarman Basketball: Neil Skelton Hockey: Alan Ng Target zone: Adam Winchcombe Tug of war: John Benefield Refreshments: Gurprit Nijar Alan Ng has written up the hockey rules. Monday 3rd February 2003 Mrs Davey has contacted Hartsdown and the hall is only available on Wednesday therefore we are now going to have to invite the year eights as they are available on Wednesday afternoon whilst the year sevens are in lessons and we do not feel that Sister Alice will be happy with us taking them out of their lessons. Also on Wednesdays only one-half side of the hall is available which consists of seven courts therefore we will have to arrange for the activities to fit into seven courts. Bibs have to be arranged to represent each team so that we all know who is from which team and who is competing against whom. We have to get hold of the list of girls so that we can divide them up into different teams. The following sports still have to written up: Football: Shaun Jarman Tug of war: John Benefield Target zone: Adam Winchcombe Basketball: Neil Skelton Also the plan for the sports hall at Hartsdown still has to be done which John Benefeild will do. ...read more.

3. Cakes meant for the cake sale were eaten by group members. Despite these problems we managed to raise enough money to run the event successfully. Despite several problems the event was run fairly smoothly, we were all doing our best and overall the event was a success. On the day of the event we had many problems with the equipment, running of sports, time management and the booking at the sports hall. The children that we had to take to the event were Year 8 students from our school they were well behaved and very attentive, this also helped us run the event smoothly. The event finished earlier than expected as we did not linger around and have the mid event snack break. After the event was over we had a round of drinks and snacks we had not planned for the litter this would leave behind. This is a checklist for the group and the event. 8. Did you meet all your objectives? If not, why not? 9. Were key deadlines met? If not, what caused them to be missed? 10. Did your planning prove effective? If not, what do you recommend Should be done differently next Time? 11. Was the project or event a success? If not, why not? If it was, what Made it special? 12. What went well and what went badly? Can you identify the highs and lows and what caused them? 13. How well did the team work together? Was it some of the time, or all of the time, or never? 14. What did you gain form working in a team? (for example skills, or insight into other's behaviour). If I were to do this event again from the start I would make the following changes: * I would change the allocation of task * Make sure members attended meeting * Change the chairman to some who had authority * Make people who didn't meet deadlines leave the group These are a few changes that I believe would make a great difference. ?? ?? ?? ?? Unit 6 Leisure and recreation in action 1 ...read more.