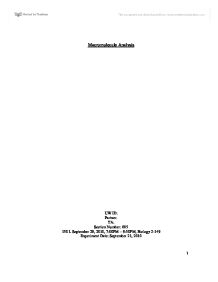 Macromolecule Analysis UW ID: Partner: TA: Section Number: 005 130 L September 28, 2010, 7:00PM - 9:50PM, Biology 2-149 Experiment Date: September 21, 2010 Introduction The purpose of this lab experiment is to identify the types of macromolecules in the solutions supplied. Using the results of the known substances, the unknown may be predicted. This experiment also familiarize with the concept of treatment controls which are used to check if the experimental conditions and procedures were conducted correctly. A positive control displays that the procedure that is very similar to the actual experimental test. The experimental result is that which is hypothesized and done many times before. A negative control is a result which does not change the normal state or negative result. (Johnson and Besselsen, 2002) In this lab, we dealt with three biochemical processes including Iodine test, Benedict's test, and Biuret test. The Iodine test reacts with starch forming a colour change. Starch is a polymer of glucose which is made up of two polymers, amylase and amylopectin. Glycogen is also a polymer of glucose which is made up of amylopectin. Amylose is an unbranched, helical molecule whose sugars are joined by ? ...read more.

(Karp 2010) Depending on the amount of the cuprous oxide, the colour change. The reddish/brown colour is the highest amount of reducing sugar, red is second, followed by orange. The unknown turned brown which means that it contains a high amount of reducing sugars. The clear blue represents no reducing sugars. This range of different colour is an indication of a semi-quantitative test. Finally for Biuret test, the honey, protein test showed a positive result. Before the experiment I was expecting honey and beer to not react however after researching I noticed that they do contain traces of protein. That explains the clear yellow colour which is not purple but still changed slightly from the negative results. Protein had the darkest colour. The reason is that the liquid used for this test forms a complex with the nitrogen and carbons of the peptide bonds in the solution. The darker purple colour indicates that there is a high concentration of purple (copper-peptide complex). The unknown remained unchanged which shows that it has no peptide bonds. The negative results did not react because they do not have any peptide bonds to create the copper- peptide complex which is the indicator. I am predicting that the unknown is cellulose. The reason for this is that it contains reducing sugars, starch, and no peptides. ...read more.