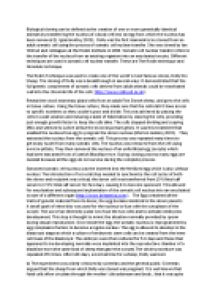 Methods and Criticism of Cloning and Genetic Modification

﻿Biological cloning can be defined as the creation of one or more genetically identical animals by transferring the nucleus of a body cell into an egg from which the nucleus has been removed (S. Ignacimuthu; 2009). Dolly was the first mammal to be cloned from an adult somatic cell using the process of somatic cell nuclear transfer. She was cloned by Ian Wilmut and colleagues at the Roslin Institute in 1996. Somatic cell nuclear transfer refers to the transfer of the nucleus from an existing organism into an enucleated oocyte. Different techniques are used in somatic cell nuclear transfer. These are The Roslin technique and Honolulu technique. The Roslin Technique was used to create one of the world?s most famous clones, Dolly the Sheep. The cloning of Dolly was a breakthrough in several ways. It demonstrated that the full genetic complement of somatic cells derived from adult animals could be reactivated well into the chronicle life of the cell ( http://www.roslin.ed.ac.uk ). Researchers took mammary gland cells from an adult Finn Dorset sheep, and grew the cells in tissue culture. Using the tissue culture, they made sure that the cells didn?t have access to specific nutrients so they couldn?t grow and divide. ...read more.

creating new life together. They argued that cloning interferes with the basic process of procreation itself. The normal sequence of egg and sperm uniting and forming a new life is abolished and the egg becomes a vehicle for the ?parasitic? parental DNA. Basically, sexual reproduction is replaced by a new version of parthenogenesis; they by replacing the rightful place of God in the Procreative process (Daniel Eisenberg; 1997).The general public argued that to what extent would people go in cloning and might end up exploiting or extinguishing human life for the benefit of the other (fear of the unknown) and also the potential for harmful abuse of the technology might keep us developing more techniques. Risks and uncertainties associated with the current state of cloning technology. They criticized cloning of Dolly saying that it diminishes the chances of natural selection and genetic variability which are the very foundation of species diversity (S. Ignacimuthu; 2009). Since Dolly was the first mammal to be cloned they feared she might have negative effects on the biochemical processes that support ecosystems and might cause changes in the rate and direction of the evolutionary responses of species to each other and their physical and chemical environments. ...read more.

The primary public fear was that a genetically modified plant would produce unexpected results. Plants produce secondary metabolites that may be toxic to humans, although these may be in low concentrations in our food; one fear has been that a GM plant may produce them in higher quantities that may be toxic to humans (Besty Tom and Jim Keogh; 2005). Many people have food allergies that vary from a mild reaction such as a rash to more severe reaction such as anaphylactic shock. There has been concern that the allergenic properties of food from a donor plant might be conferred on the host plant and that people may not be aware that the genetically engineered food contains the new proteins. Cowan M.K (2009) says that some scientists feared that the release of recombinant DNA plants without risk assessment may disrupt the ecosystem. Viral nucleic acid, inserted into plants to make them resistant to viruses might combine with the genome of an invading virus to make the virus even stronger! Some are concerned that the engineered genes can jump species and have unintended consequences as they spread far afield from the original engineered crop. Others have questioned whether the nutritional quality of genetically engineered foods could change unexpectedly perhaps a particular nutrient may change to a form that cannot be metabolized or absorbed properly. ...read more.