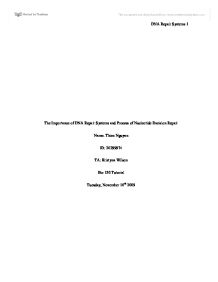 As we go about our daily lives, our cells are hard at work to maintain our well-being.  Whether it is providing the energy required doing everyday tasks or just repairing what has been damaged from the constant bombardment of harmful forces, the cell is a formidable force on its own.  And it should, because within every cell, DNA enclosed, which is the genetic information that houses the instructions for an organism to function and also a very vulnerable part of the cell to harmful alterations.  With radiation, the backbone of a DNA is broken, when exposed to reactive chemicals or UV light; the DNA’s bases can be altered structurally (Karp, 2008).  While there are many mechanisms for repair for DNA, the nucleotide excision repair (NER) is one of the most effective and versatile repair systems within the cell that acts on the DNA.  The reasons for this is because of its ability to recognize, remove a wide variety of alterations in the DNA called lesions, and replacing the damaged part of the DNA (Leibeling et al, 2006).

Before this system can do any work on the damaged part of the DNA, it must recognize the lesion first.  There are two ways pathways in which the nucleotide excision repair can happen, during transcription, called the transcription-coupled pathway, in which the lesion is detected and signalled by halted RNA polymerase with a CSB protein or in the global genomic pathway that scans for altered DNA strands in the remainder of the genome in which the protein XPC is responsible for alteration recognition.  In general the only separation between transcription-coupled pathway and the global genomic pathway is the way it recognizes the sites of damage (Karp, 2008).

Once the lesion has been recognized by a pathway, the separation of the DNA strand commences.  In this part of the pathway, XPB (Xeroderma Pigmentosum B) and XPD (Xeroderma Pigmentosum D) proteins, two helicase subunits of TFIIH (transcription factor II H) are used to separate the damaged section of DNA.  After the separation is complete, an incision is made to remove the damaged part of DNA by XPG on the 3’ side and the XPF-ERCC1 complex on the 5’ side (Karp, 2008).

As the damaged DNA part is removed from the DNA, DNA polymerase δ/ε then begins to replace the nucleotides that were removed from the incision using the complementary DNA strand as a template.  Lastly, the process of ligation occurs and DNA ligase I joins the two pieces of DNA together to complete the nucleotide excision repair process (Karp, 2008).

In conclusion, while there are many repair mechanisms that the cell uses, nucleotide excision repair is one of the most effective repair mechanisms that act on the DNA.  This is mostly due to its versatility and its simplicity in detection, removing and replacing damaged DNA sections.  As we understand more about the repair systems of the cell and DNA, we begin to realize the consequences of DNA repair deficiencies.  People who have a deficient repair system cannot remove segments of DNA that are damaged.  Thus, even going out in the sun would be impossible, as the harmful UV lights would damage the DNA within the skin and the skin would have no way of repairing it.  This type of deficiency can develop into diseases such as xeroderma pigmentosum (XP), Cockayne syndrome (CS), and photosensitive form of trichothiodystrophy (TTD) (Leibeling et al, 2006).  Therefore, having repair systems within the body and the cell is absolutely critical for the well being of the organism.