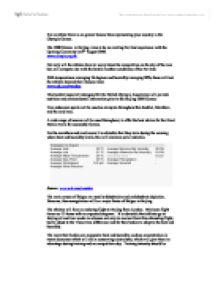 Nutrition. This booklet especially designed for the British Olympic Association will provide nutrition and environmental information prior to the Beijing 2008 Games. Two endurance sports will be used as examples throughout this booklet, Marathon and the

For an athlete there is no greater honour than representing your country in the Olympic Games. The 2008 Games in Beijing, aims to be an exciting Far East experience with the Opening Ceremony on 8th August 2008. www.olmpic.org.uk Not only will the athletes have to worry about the competition on the day of the race but ,will compete also with the hostile weather conditions of the Far East. With temperatures averaging 26 degrees and humidity averaging 90%, these will test the athletes beyond their chosen event. www.ask.com/weather This booklet especially designed for the British Olympic Association will provide nutrition and environmental information prior to the Beijing 2008 Games. Two endurance sports will be used as examples throughout this booklet, Marathon and the road race. A wide range of sources will be used throughout, to offer the best advice for the Great Britain Team for successful Games. For the marathon and road racers it is advisable that they train during the evening where heat and humidity levels, this will minimize solar radiation. Averages for August Average High 29 �C Average Morning Rel Humidity 90.0% Average Low 21 �C Average Afternoon Rel Humidity 63.0% Average Mean Temperature 25 �C Typical Sky Cover Broken Average Dew Point 20 �C Average Precipitation - Average Windspeed 9.3 kph Average Snowfall - Average Wind Direction Source: www.ask.com/weather The main causes of fatigue are usually dehydration and carbohydrate depletion. However, thermoregulation will be a major factor of fatigue in Beijing. The athletes will face an enduring flight to Beijing from London. Minimum flight times are 13 hours with an expected stopover. It is advisable that athletes go to Beijing at least two weeks in advance not only to recover from this exhausting flight, but to adjust to the 7 hour time difference and for their bodies to adapt to the heat and humidity. The more their bodies are exposed to heat and humidity, sodium concentration in sweat decreases which will aid in conserving electrolytes, which will give them an advantage during training and on competition day. ...read more.

www.usatf.org/groups/Coaches/library/hydration/IMMDAAdvisoryState Pre-Competition Preparation Pre-competition preparation will require the athletes to reduce their training intensity in the build up to Beijing 2008. A reduction in training intensity will give both body and mind a break from vigorous training. This is known as Tapering. As the athletes taper, it is important to replace training with books, magazine articles, or other materials that will provide athletes with motivation and inspiration. It is also important to familiarise the athletes with the course, either by visiting the course or via map depending on the athlete's psychological issues. "In the last few days, the coach should stimulate the athlete's belief in success, aid relaxation and reading; avoid boredom by organising interesting but relaxing outings, and so on. Source: DICK, FRANK. W Sports Training Principles,[1997],3RD Edition page 298 Finding out who will be competing in the both the marathon and the road race is also vital. These will also the athletes to know where the main competition will be from and therefore plan their strategy for their race. Being aware of the opponents on race day, the British Olympians will be able to anticipate the speed, whether to start of the race at either the front or middle of the pack, whether to run or cycle at the outside or inside lanes etc. "The opposition must be clearly identified and known to the athlete, as not all athletes in a contest may be opponents. Information on each opponent should include previous best performance, recent history of competition, and behaviour in competition." Source: DICK, FRANK.W Sport Training Principles, [1997]3rd Edition, Page 298 As the intensity of training is reduced, tissue damaged can be repaired and muscular strength restored. It will also allow energy reserves to be restored. Source: Wilmore & Costhill [1999] Below is an example of the amount of miles to run in the weeks prior to the day of the marathon. ...read more.

The Great Britain team face an enduring flight and will have to adapt to the west to east time difference. British Olympians will have to battle with the extreme weather conditions as well as battle with competitors on race day. Planning and preparation will be vital to successful games for the British teams. In this booklet, examples of a two week preparation to the games was used, however, preparation will need to be in place, months leading up to the games. For successful games in such hot and humid conditions, correct nutrition for the athletes is essential. Normal marathon and road race nutrition strategies can be complex but will be more so in Beijing. Carbohydrate and fluid intake, pre, during and post race is essential to prevent dehydration, hyponatremia, and gastric problems. Athletes competing in the Road Race will be able to carry carbohydrate gels and bars in the pockets of their shirt /vest; however, accessing drinks from water stations may prove difficult while on their bikes and will be approaching them at speed. Marathon runners may find fluid and CHO intake during the race difficult as holding a foreign object whilst running may put them of their stride or arm swing momentum. However off putting the consumption of fluid and carbohydrates during competition it is essential. Muscle glycogen levels can be maintained, fatigue and dehydration prevented. Post race food intake is crucial in order to restore fluid that was lost and to replenish muscle glycogen stores. This is a time consuming process which could last up to 6 hours in Beijing. It is important that athletes consume foods and fluids within the initial two hour window. It is advisable that these portions are small in size as large portions may make the athlete nausea. BIBLOGRAPHY BOOKS Dick F. W, [1997] Sports Training Principles, A &C Black, London McArdle, Katch, Katch, [1996] Exercise Physiology, Baltimore, Maryland, USA Wilmore & Costill, [1999] Physiology of Sport & Exercise, Human Kinetics, Champaign, USA WEBSITES www.ask.com/weather WWW.MARATHONTRAINING.COM/MARATHON/METRIC3.HTML www.olmpic.org.uk www.runohio.com/features/07-21-05medical.html www.usatf.org/groups/Coaches/library/hydration/IMMDAAdvisoryState PUBLICATIONS USATF Self Testing Program for Optimum Hydration ...read more.