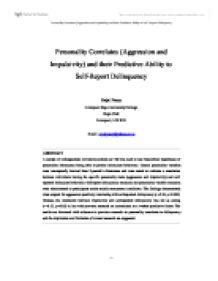 Contrary to the controversial status of previous research concerning Eysenck's theory of criminality, the findings in this study were remarkably consistent. Self-reported delinquency was significantly associated with aggression, an element that makes up Eysenck's dimension of psychoticism. Secondly, it adds to the growing literature showing no association between neuroticism and its elements as predictive of delinquent behaviour. In line with previous research (Furnham et al., 1991; Heaven, 1996; Rushton & Chrisjohn, 1981), impulsivity as an element of neuroticism, found no support for Eysenck's predictions. This lack of support for neuroticism was as clear as the evidence for psychoticism and this may be for a number of reasons. Eysenck could simply be mistaken when he declared neuroticism to be a predictive factor of self-reported delinquency. Rushton & Chrisjohn (1981) interpreted his hypothesis of neuroticism; in that, it played an interactional role, affecting the type of criminal activity under observation. Eysenck's own hypothesis (1977) is almost agreeing with Furnhams (1991) critique when he implies neuroticism to simply be less crucial during early stages of development of antisocial tendencies. But despite the controversies in relation to this dimension, psychoticism and its behavioural aspects (interpersonal hostility, egocentrism, "affective insensitivity") are unmistakably useful variables for prediction of delinquency. A limitation of the sample could perhaps be argued by critics that the conventional way of measuring delinquency would have been through a 'known-group' design (Feldman, 1977; Krueger et al. 1994 cited in Romero, Luengo and Sobral, 2001) It has been suggested that the observed relationships between personality and detected delinquency i.e. apprehended delinquents, may simply reflect relationships between personality and likelihood of apprehension. Secondly, the institutionalisation of individuals may also influence personality. In the present study however, an undergraduate sample was studied who were not institutionalised and the study was ecologically valid. Known-group delinquency studies have failed to control the confounding variables of A.) The relationship between different personality variables leading to apprehension B.) The institutionalisation of delinquents may have influenced personality variables to quite an extent. Romero et al. ...read more.