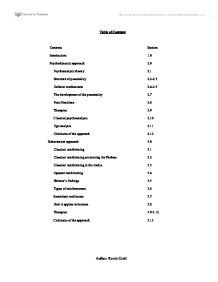 Psychology was a branch of philosophy before it broke away into a distinctive discipline over the last century. At the time when psychology was beginning to develop from its post-renaissance past, several schools formed.

Table of Contents Contents Section Introduction 1.0 Psychodynamic approach 2.0 Psychoanalytic theory 2.1 Structure of personality 2.2-2.3 Defence mechanisms 2.4-2.5 The development of the personality 2.7 Post-Freudians 2.8 Therapies 2.9 Classical psychoanalysis 2.10 Ego analysis 2.11 Criticisms of the approach 2.12 Behaviourist approach 3.0 Classical conditioning 3.1 Classical conditioning accounting for Phobias 3.2 Classical conditioning in the media 3.3 Operant conditioning 3.4 Skinner's findings 3.5 Types of reinforcement 3.6 Secondary reinforcers 3.7 How it applies to humans 3.8 Therapies 3.9-3.12 Criticisms of the approach 3.13 Humanistic approach 4.0 Client-centred therapy 4.1 Maslow's hierarchy of needs 4.2 Logotherapy 4.3 Criticisms of the approach 4.4 Skinner's findings 4.5 Which approach? 5.0 Conclusion 6.0 Appendices Diagram of the levels of states of consciousness Little Han Pavlov's conditioning process. Bibliography 1.0 Introduction Psychology was a branch of philosophy before it broke away into a distinctive discipline over the last century. At the time when psychology was beginning to develop from its post-renaissance past, several schools formed. These schools had their own particular theories and views on what the nature and scope of psychology should be about. In addition, each particular school had their own methodology that they advocated for studying psychological phenomena. The first approach that originated was proposed by the functionalists. They believed that psychology should be the study of cognitive processes. During the same period, the structural school of psychology was gaining support. The Structuralists held that psychology should be the study of the conscious experience as well as the structures that are concerned with the conscious. Additional other schools formed, most noticeably because of there discontent with the views that were available. The schools that were developed offered alternative views on the subject of psychology. Predominantly, these included Freud's psychoanalytic school, Watson's behaviourist school and a German school known as the Gestalt. Psychologists' around at the time tended to associate themselves with the particular school that they believed was accurate for explaining psychological phenomena. ...read more.

The approach is heavily influenced by the work of the associationists, Pavlov and Thorndike, and early behaviourists such as Watson and Hull. Behaviourists believe that learning is achieved through conditioning, either classical or operant. Since they consider that they know how all behaviour(s) is acquired, they claim that they can manipulate behaviour to do such things such as train people or to remove maladaptive phobias. Additionally, because of their disregard for hereditary factors they believe human feature such as intelligence are acquired through continuous learning. Therefore, as a result, in theoretical terms the behaviourists believe that just about any individual has the potential to be an academic or anything they want really (within reason though!). The study is sometimes referred to as stimulus(s)-response(r) psychology because it is primarily concerned with the stimuli that invoke a behavioural response. learning theory: 3.1 Classical conditioning Classical conditioning is based on the principle of associative learning. The theory proposes that behaviour is involuntary and that it occurs automatically when an appropriate stimulus is presented. Classical conditioning presumption holds that an individual learns behaviour towards a particular stimulus because of its association with something else. Much of the theory is based on the work of Pavlov, a physiologist who was studying salivary reflex in dogs. In his study he observed that dogs not only salivate at the sight and smell of food ('natural response'), but also at the sight of the food container. Through several assortments of experiments he demonstrated that he could use a variety of stimulus to achieve the salivating effect (using 'unnatural stimuli' of course). Examples he used to demonstrate this included ringing a bell every time he was about to issue or had issued the dog food. Again, this caused the dog to form an association with the unnatural stimuli (see Appendix 3 for diagram showing his work). In his work he concluded the following: 1. ...read more.

? The differences between the humanistic theories are difficult to assess. In addition there is some disagreement between prominent humanistic advocators * The client-centred therapy developed by Rodgers has came under widespread criticisms, mainly because the therapy is claimed to only work with individuals who are motivated and willing to seek help, therefore it is unlikely to work with patients who have serious mental problems. . 5.0 Which approach? Due to the complexity and various perspectives of the approaches available, one might be asking but what approach? For that reason it should be noticed that psychologists feel free to choose from what ever approach they feel as a relevant to particular situations. For example, if a clinical psychologist is working with an individual who is suffering from a phobia, he may rely on the behavioural aspect to account for the development of it and then use the principles of it to alleviate the phobia. Similarly, a counsellor psychologist may feel that the humanistic approach is the best available to treat some one with low self-esteem. 6.0 Conclusion Psychology was a branch of philosophy before it broke away into a separate subject over the last century. In the initial stages of the discipline there were several schools that endeavoured to explain psychological phenomena. These schools, however, disappeared but their influence is evident in contemporary psychological approaches. Contemporary approaches offer various perspectives that attempt to explain psychological phenomena, although very much similar to the previous schools, they are not as subjective and are less directive. The psychodynamic approach contends that early childhood has a significant influence on an individual in adulthood; moreover, the approach believes that unconscious forces are the cause of human behaviour. On the other hand, the behavioural approach believes individuals are subject to environmental influences. Primarily, they believe learning occurs through conditioning, either, classical or operant. The humanistic approach conversely, asserts that individuals have free will and that they have the power to influence their mental state and life. Author: Kevin Conti ...read more.