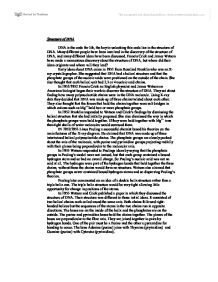 Structure of DNA DNA is the code for life, the key to unlocking this code lies in the structure of DNA. Many different people have been involved in the discovery of the structure of DNA, and many different ideas have been discussed. Francis Crick and James Watson have made a momentous discovery about the structure of DNA, but where did their ideas originate and where will they lead? Early ideas about DNA came in 1951 from Rosalind Franklin who was an X-ray crystallographer. She suggested that DNA had a helical structure and that the phosphate groups of the nucleic acids were positioned on the outside of the chain. She also thought that each helical unit had 2,3 or 4 nucleic acid chains. ...read more.

In 1952 Franklin responded to Watson and Crick's findings by dismissing the helical structure that she had initially proposed. She also dismissed the way in which the phosphate groups were held together. If they were held together with Mg++ ions then tight shells of water molecules would surround them. IN 1952/1953 Linus Pauling a successful chemist based his theories on the main features of the X-ray diagram. He claimed that DNA was made up of three intertwined helical polynucleotide chains. The phosphate groups are closely packed about the axis of the molecule, with purine and pyrimidine groups projecting radially with their planes being perpendicular to the molecular axis. In 1953 Watson responded to Paulings ideas by saying that the phosphate groups in Pauling's model were not ionised, but that each group contained a bound hydrogen atom and so had no overall charge. ...read more.

The triple helix structure would be very tight allowing little opportunity for change in positions of the atoms. In 1953 Watson and Crick published a paper in which they discussed the structure of DNA. Their structure was different to those initial ideas. It consisted of two helical chains each coiled round the same axis. Both chains followed right-handed helices but the sequences of the atoms in the two chains run in opposite directions. The bases are on the inside of the helix and the phosphates are on the outside. The purine and pyrimidine bases hold the chains together. The planes of the bases are perpendicular to the fibre axis. They are joined together in pairs by hydrogen bonds. One of the pair must be a Purine and the other a pyramidine for bonding to occur. The base Adenine (purine) joins with Thymine (pryimidine) and Guanine (purine) with Cytosine (pyrimidine). ...read more.