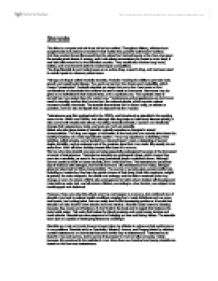 the effects of steroids on the body

Steroids The drive to compete and win is as old as humankind. Throughout history, athletes have sought foods and potions to transform their bodies into powerful well tuned machines. And then ancient Incas discovered that the ashes from burned leaves of the Coca tree gave the people great stores of energy, and made sleep unnecessary for hours or even days, it was later discovered to be the stimulant cocaine. They would take it before long hunts, battles, and even found it useful in ancient sport competitions. The drug Steroids is commonly known as an active drug, a sport's drug, and has been used in certain sports to enhance performance. This type of drug is called Anabolic steroids, Anabolic meaning the ability to promote body growth and repair body tissues. The word comes from the Greek word anabolikis, which means "constructive". Anabolic steroids are drugs that come from hormones or from combinations of chemicals that achieve the same result as hormones. Hormones may be given to an individual in their natural state, or in a synthetic one. The synthetic state is sometimes more potent than the natural one. ...read more.

However, these are only side effects and may not happen to everyone, but continued use of steroids may lead to serious health conditions ranging from merely irritations such as acne, bad breath, and aching joints. But can easily lead to life threatening problems. It is said that steroids can also lead to heart attacks and even strokes. Steroids cause extreme bloating because they create an imbalance of chemicals in the body and to regain that balance the body holds water. This extra fluid raises the blood pressure and could cause strokes and heart-attacks. Steroids are also suspected of bringing on liver and kidney failure. The steroids seem just as capable of destroying tissues as creating it. Steroids are most commonly known to been taken by athletes to enhance their performance in competitions. Steroids such as Durabolin, Winstrol, Anavar, and Pregnyl taken by athletes contain testosterone or chemicals that act in similar way to testosterone. Testosterone is found in men and women, but in women it is present in much smaller amounts, mainly because it is produced in the testicles in men. More than one hundred and twenty steroids are based on the hormone testosterone. ...read more.

Others don't like steroids, but will prescribe them, knowing their patient, if not given them by their doctor, will get them from somewhere else. This way they can regulate them, tell the patient the correct way to use them, and keep an eye on them. Still others doctors consider steroids safe when administered under medical supervision, which includes carefully regulating dosages and watching for the first signs of trouble. Other doctors recognize the possibility that although sometimes steroids do serious harm, the same can be said of minor drugs, such as aspirin. Millions of people take aspirin daily, because the benefits greatly outweigh the risks, and suffer no harm as a consequence, and the doctors feel the same is true about steroids. When under medical supervision, doctors feel their patients are safe because of their good physical condition and the drugs can be stopped if trouble begins to show. They feel that with steroids, much like with aspirin, the benefits greatly outweigh the risks. Steroids are dangerous when used incorrectly, and should be used only under medical supervision. It has undesired side effects for men, women, and even the unborn. When abused steroids are no longer anabolic, they stop building the bodies tissue and start tearing it down as anything will when used in excess. ...read more.